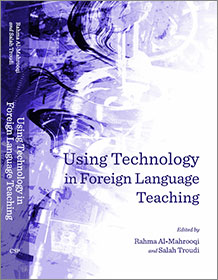 Bookcover and billboard image of students with iPad image via Shutterstock

Chat rooms play a positive role in motivating students and encouraging an independent approach to learning English as a foreign language.

Innovative research highlighted in a new book Using Technology in Foreign Language Teaching shows the advantages and disadvantages of utilising IT in teaching English in countries like the United Arab Emirates (UAE), Saudi Arabia, Oman, Iran and Malaysia.

The current interest in combining different teaching methods with technologies that promise to motivate learners to respond effectively has meant that many language-teaching institutions strive to provide intensive foreign language instruction. This helps reduce the time period needed to learn the language and is seen to be more cost effective.

Ten undergraduate first year students from a women’s arts university in the UAE, were tracked over one semester to investigate the evidence of learning English independently, whilst involved in classroom based chat room tasks.

The research led by Dr Jo Maynard and Professor Salah Troudi from the University of Exeter, UK found that students benefitted from day to day conversations with people who speak English as a first language in a chat room setting.

It is able to provide what is considered a best practice scenario of improving foreign language skills by interacting with native English speakers in a genuine conversation using everyday speech, rather than solely with teachers with a classroom pupil teacher dynamic.  Many aspects of the virtual meeting space of a chat room wouldn’t be possible in reality due to the conventional laws of the United Arab Emirates between the sexes and the ability to interact with British or American people outside the university setting.

Professor Troudi explained what contributed to the positive response to learning English via the chat room format as an additional aid to classroom based activities.

He said:“The effect of the virtual learning environment appeared to free participants from their preconceived concepts of classroom roles. It helped to develop their comprehension, speaking, written and vocabulary skills whilst interacting with English speakers in chat rooms. This led to instances of decision making; critical reflection and independent action; such as selection of words, self-correction, initiation of questions and the ability to seek clarification.

Factors which contributed to the student’s motivation for using the chat rooms are lack of authentic conversation in the classroom, the relatively risk-free context of real time but not face-to-face interaction and the appeal of the technology.  Students ranged in language proficiency from novice to intermediate. In fact, the opportunities for increased interaction helped students improve different aspects of English language.  Some of the shy students appeared to be braver, with less hesitation so finding it easier when communicating with someone in a virtual format such as chat rooms, text or Skype.”

Professor Troudi added:“These results were particularly interesting as these learners usually demonstrated dependent behaviour in class and were generally not motivated to learn English. Internet chat rooms could have a role to play in helping learners to apply practices more broadly to their language learning.”

The book published by ‘Cambridge Scholars’ debates the issues of IT integration in language teaching, discussing its advantages and disadvantages from the point of view of actual users and professionals.