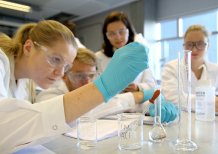 Research suggests enrichment activities to encourage children to study STEM subjects have no impact on results. Image courtesy of Per Henning/NTNU via Flickr

Enrichment activities to encourage children to study science, technology and mathematics have no impact on results

Enrichment activities to encourage pupils to study science and technology subjects have made no difference to their performance in mathematics exams, new research shows.

Data shows children who didn’t take part in the activities, run and funded by various governments, private companies and charities, did just as well in GCSE tests.

The STEM enrichment activities have been running to encourage more children to develop science, technology, engineering, and mathematics (STEM) skills, which are vital to the economic growth of the UK. There have long been concerns not enough children are studying these subjects, in contrast to pupils in other nations.

Dr Pallavi Amitava Banerjee, from the University of Exeter’s Graduate School of Education, used the National Pupil Database, government statistics about each school and pupil, to assess the impact of STEM enrichment schemes on how well students performed in mathematics. By looking at five years of data she found that among the 300 schools who participated there was no impact on maths GCSE results.

Dr Banerjee compared GCSE results in 300 state schools where all pupils had participated in STEM enrichment activities since 2007 to a comparator group of all other secondary schools. A grade of C or above in maths was considered a success. Comparator schools had a slightly lower figure of students doing well at mathematics at first, but results soon caught up with those at schools who were taking part in intervention activities.

The comparator group had a slightly higher proportion of pupils with free school meals, and the study did not find evidence that STEM interventions improved outcomes for less advantaged students.

“Of course attainment is only one indication of the success of these programmes, but it's important because students are more likely to continue to study STEM subjects when they get higher grades. Good attainment in mathematics is also a pre-requisite for admission to STEM degree courses,” Dr Banerjee said.

All the activities considered as part of the study were delivered as after-school clubs, competitions, or out-reach programmes, and were run during Key Stage 3 and 4. Activities run by ten providers were considered for the study, and children took part from the beginning of year 7 until they took their GCSEs. Eight of these were government organisations, one was an educational charity, and one received public funding.

National Pupil Database data from 2007 to 2011/12 for GCSEs and 2013/14 for A-levels was used in the study. All special schools, pupil referral units, and independent schools were excluded from the study. State maintained schools included were academies, city technology colleges, voluntary aided, voluntary controlled, and foundation schools.

Dr Banerjee said: “It is important to state that these enrichment activities can be fantastic, but the study did not find a direct impact on results and further research should be carried out to find out why.”