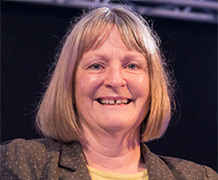 Debra Myhill, Professor of Education at the University of Exeter has been awarded an MBE in the Queen's Birthday Honours list for her leadership of the Secondary PGCE programme and the Centre for Research in Writing.

The fields of language and literacy are Professor Myhill’s main areas of expertise, with a focus on the teaching of writing, gender and literacy, and talk. Her research is conducted collaboratively with colleagues in the Centre for Research in Writing. Their most recent research has looked at the role of grammar in the teaching and learning of writing, with a focus on functionally-oriented grammar making links between language and meaning, and children‘s metalinguistic understanding of writing. They are also interested in composing processes in writing, and have explored children, young people and adults’ understanding and management of the writing process.

Professor Myhill is currently the Dean of the College of Social Sciences and was previously the Head of the University of Exeter’s Graduate School of Education, which is consistently recognised by Ofsted and the National College for Teaching & Leadership as an outstanding provider of primary and secondary initial teacher education. Professor Myhill led the school towards its ranking as one of the top three university providers of initial teacher training in the Good Teacher Training Guide 2013 and was at the helm when the Graduate School of Education became the 6th in the UK for world leading and internationally excellent research in Education and an influencer of national education policy.

The announcement of the MBE came as a surprise to Professor Myhill who said she was humbled by the honour.  She said:“I feel really touched that people valued my work enough to nominate me for this.  For me, education matters.”

The current Head of the Graduate School of Education, Dr Nigel Skinner expressed his support and joy at hearing of the honour bestowed on Professor Myhill.  He said: “Professor Debra Myhill has made an invaluable impact on people, on policy and on practice through the various roles that she has occupied in her life. Prior to joining the University of Exeter she was Head of the English department in a comprehensive school and this experience has undoubtedly helped her to make strong links between her research into the teaching of English and actual practice in school classrooms. Since joining the university Professor Myhill’s work has made a huge contribution to the teaching of language and literacy both nationally and internationally. This was recognised in June 2014 when the Centre for Research in Writing which she leads was awarded the Economic and Social Research Council ‘Celebrating Impact Prize’.”

He added:“Her commitment to helping young people to be able to use language and literature for both personal fulfilment and economic well-being and the energy which she brings to the many and varied aspects of her work are inspirational and it is very pleasing that this has been recognised in the Honours list.”

Professor Myhill is about to start a new research project to investigate the impact that bringing teachers and writers together has on writing development of their students. The ‘Teachers as Writers’ project is in partnership with the Open University and Arvon, a leading UK creative writing charity, which has been funded by the Arts Council of England. This will be the first study internationally to rigorously evaluate the impact of teachers’ development as writers on students as writers.