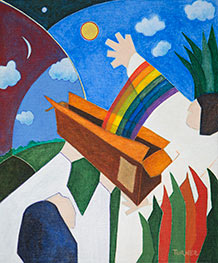 A new textbook has been written by University of Exeter academics which invites pupils to explore and interpret the meaning of biblical stories in a revolutionary new way. ‘The Art of Bible Reading’ considers different types of ‘story’ involved in reading the Bible.

These include ‘biblical stories’, such as Noah and the flood or Jesus turning water into wine at the Wedding in Cana, and the ‘story’ of God’s salvation that overarches the Bible as a whole.

In addition, the textbook looks at the ‘story’ of the church, how it has been shaped by the ‘Bible’s story’ and shapes how Christians interpret ‘biblical stories’. Lastly, it explores the personal ‘life-stories’ of pupils, including their communities, traditions and cultures, whether Christian or not, and how these influence, and are influenced by, their reading of ‘biblical stories’.

Paintings by Devon-based visual artist Brian J Turner are incorporated into the textbook. He is in the process of painting all the stories in the Bible, which will total a series of 3,000 artworks, eight of which have been incorporated into ‘The Art of Bible Reading’. His colourful and quirky images provide a stimulus for the pupils to think about how they and other people, both within and outside the Christian community, read, interpret and respond to the biblical stories upon which the images are based.

Teaching Religious Education in schools has its challenges. It often draws criticism from different religious and secular groups depending on the approach that is taken. This new approach takes seriously the lived experiences of members of faith communities, whilst at the same time being open to ‘readings’ of the biblical texts that are rooted in other faith traditions and secular traditions. Art is used throughout the textbook as a stimulus to get both secondary school teachers and pupils to see how the artist has interpreted the selected biblical stories.

Dr Rob Freathy from the University of Exeter’s Graduate School of Education said:“The stylised art work by Brian J Turner is capable of stimulating some profound thinking about the meaning of biblical texts. It will open up pupils to new ways of engaging with the Bible and enable them to reflect on how their life-stories influence their interpretation of the biblical stories and how the biblical stories in turn influence their understanding of the world.”

This innovative approach makes it clear to pupils that there are no neutral standpoints. Everybody has a life-story and an understanding of the world, and this influences how they interpret the Bible. The curriculum materials make it clear that for those whose life-stories are part and parcel of the story of the Christian community, the Bible is particularly important and has authority for them. Their sense of community and ethical commitments are shaped by participation in shared stories of faith, not by moral rules.

The originality of the approach to Religious Education is explained by theologian Dr Esther Reed. She said: “The curriculum materials move away from the ‘proof texting’ approach evident within the vast majority of existing textbooks used for teaching Christianity at this level. Proof-texting approaches treat the Bible as a rulebook providing ethical principles that guide Christians in making correct moral decisions. By contrast, we want to enable pupils to think about the broader significance and meaning of biblical stories and the Bible’s overarching story for Christians.”

Dr Reed added:“We have an opportunity to think seriously about the historical and cultural significance and meaning of the world’s best seller. Our textbook represents one major contribution to the promotion of critical and creative engagement with the Bible.”

‘The Art of Bible Reading:12 Lessons on the Bible for Key Stage 3’, published by Kevin Mayhew Ltd, was produced in collaboration between the University of Exeter’s Graduate School of Education, the Department of Theology and Religion, and in partnership with the Bible Society and painter Brian J Turner.