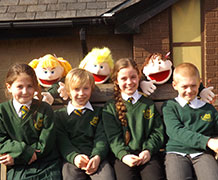 Superheroes to the rescue, to religious education and beyond

A new initiative that uses superheroes to teach Religious Education at a school in Cornwall has won a national award.

The distinctive characters, called Know-it-all-Nicky, Debate-it-all-Derek, Ask-it-all-Ava and Have-a-go-Hugo, were created by a University of Exeter education expert in collaboration with a primary school specialist leader of education from Sir Robert Geffery’s School in Saltash.

Now, this novel approach to teaching RE has been recognised at the Times Educational Supplement School’s Awards ceremony by winning the Humanities Award.

The pilot project was praised for adopting cartoon characters, collectively known as ‘the RE-searchers’, to embody a range of approaches to studying religion. Each superhero has strengths and weaknesses, and the characters represent different approaches to exploring religious topics, from questioning and arguing, to interviewing and empathising, and participating and experiencing.

The project experimented with a range of strategies to familiarise school pupils with the research methods and the characters, through comic strips, puppets and role play.

This approach was piloted by Sir Robert Geffery’s School teacher Giles Freathy in collaboration with his brother, Dr Rob Freathy, from the University’s Graduate School of Education which ran the project with sponsorship from the Culham St Gabriel’s Trust.

Giles explained how the puppet, which he voiced and operated, was used to portray a fictional pupil demonstrating to the other pupils how to play the role of one of the RE-searchers.

He said:“In the ensuing role-play, the ‘real pupils’ could identify with the ‘puppet pupil’, learning from his successes and failures in attempting to complete the task, and empathising with his sometimes anxious, questioning or hesitant commentary. During the process, as the teacher, I move between being the puppeteer controlling and voicing the role-playing puppet, to evaluating the puppet’s performance from the perspective of someone like a ‘theatre critic’, and engaging the pupils in a discussion about what the puppet was doing and why.”

In this way Giles modelled the way in which pupils might immerse themselves in the role of a RE-searcher, whilst continuing to evaluate the character’s values and research preferences, and critiquing their own role-playing performances.

He added:“Although it sounds complicated, the approach has been really successful. We are looking into other ways of using puppets to represent different voices in dialogue about religions and to stimulate metacognition and self-regulation.”

Learning is also supported by reminder prompts such as RE-searcher badges, key rings and a table-top character. Students use the RE-searchers in tasks and the characters even leave comments on their work. The judges for the TES School’s Awards commented on the rigour of the approach and the pupils’ engagement, empathy and ability to analyse information from multiple stances.

The project saw superhero Ask-it-all Ava use her powers of questioning and arguing as a basis to interview Christians from four different denominations. The school pupils asked each of the Christians the same questions in order to identify the similarities and differences. Afterwards the class discussed the effectiveness of this approach and what they had learned about the diversity of viewpoints within Christianity.

Dr Freathy said:“As an educational researcher, I find that what works in theory, doesn’t always work in practice. Theories often benefit from being tested in the classroom and it’s important to create the opportunities to both influence and support teachers in schools. In our project, theory and practice have been developed hand-in-hand. Because we are brothers, we’re able to be more candid with each other; this has definitely led to improvements in our respective contributions to the project. Our superhero research-led approach has benefited the pupils at Sir Robert Geffery’s School and hopefully will bring about a revolution in the way RE is taught.”