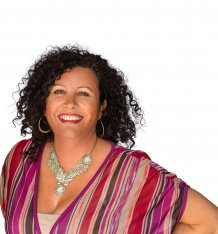 Exeter alumna and single mum entrepreneur, Ali Golds (PGCE, 2009), was recently named by The Independent as one of the top 20 Extraordinary Women of 2017.

Ali Golds, a single mum from Littlehampton who has been empowering women business founders and single mum entrepreneurs by teaching them start-up skills since 2012, has been recognised alongside international politicians and sportswomen.

As a business coach, Ali has not only supported and mentored other women but has also achieved things personally and become a successful businesswoman.

Through her ‘heart project’ The Juno Project, Ali more recently created the ‘This Is Me’ programme, working with girls aged 14-16 who’ve experienced difficult circumstances. It is designed to give them the confidence to achieve whatever goals they set themselves. Ali Golds is also author of the best-selling book “How To Be Your Own Boss As A Single Mum”.

Ali commented on the top 20 listing: “The Independent recognised my fight against adversity, and my passion for supporting vulnerable women and girls to achieve their goals and dreams despite their own adversity. It is humbling to be in such grand company too.”