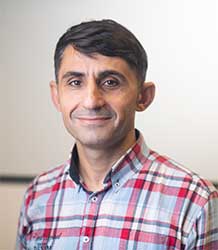 In 2019-2020 Hassaniyan was a Postdoctoral Research Fellow at the Centre for Kurdish Studies, at the University of Exeter, and since 2020 he has been in the role of Lecturer of Middle East Studies.

The history of the Ottoman Empire, state and society in the Middle East, Iran (since the 16th Century-), history and politics in Kurdistan, and Iraq (Ottoman era, nation-state building) are key eras of Hassaniyan’s teaching. activities.

I am Lecturer in Middle East Politics.

I have a huge patient for research, and therefore a great part of my professional and leisure time is dedicated to research and study of contemporary and historical events and developments in the Middle East.

I have an interdisciplinary research approach, applying a mixture of political, sociological and historical methods to provide a full picture of the subject topic. In terms of concepts and terminologies; nation, nationalism, ethnicity, ethnonationalism, identity, centre-peripheral relation, internal colonialism, socio-political and environmental movements, civil society and civic activism, security, cross-border nationalism/interaction/movements, and non-state armed groups are the dominating terms and vocabularies applied in my research. I am interested in studying security within states/societies, inspired by the Copenhagen School of Security (CSoS) as theoretical framework, a move toward an inclusive approach to security where security of environment (nature and ecology), culture, food, human and societies, are the main focus part of this theoretical/conceptual frameworks.

Since in my research a great part of the focus is devoted to relation and interaction of state and society in authoritarian contexts, where different aspects of life (identity, culture, language, etc.) are securitised and research on these topics may cause risks and implications for researchers as well as the subject matter, I rely for the most part on remote fieldwork and collecting data produced and distributed on different social medial platforms. For instance in the case of Iran the Application of Telegram a quite popular and commonly used inside the country has been a useful source of data. Therefore I have benefited greatly from data accessible to the public on this application. My mastering of and familiarity with several Middle Eastern languages among them Kurdish, Persian, Turkish and Arabic has made it possible to read and interpret; text and other materials from different societies and communities of this region and use these data in my teaching and lecture.

I am the author of “Kurdish Politics in Iran, Crossborder Interactions and Mobilisation since 1947” published by Cambridge University Press. The book focuses on the evolution of the Kurdish national movement in Iran in its relation to the Iranian state and its relation to the Kurdish movement in Iraq since the second half of the 20th century until 2017.

In line with other research activities, I am currently part of a research project led by Professor Gareth Stansfield focusing on the Kurdish Peshmerga forces in Iraq, titled “From insurgents to regulars: The military and political implications of the transformation of the Peshmerga of the Kurdistan Region of Iraq”. This research addresses the development of the Peshmerga and Western governments’ recent efforts to turn the force from a collection of non-state party militias to a regularised military organization of the Kurdistan Region of Iraq within federal Iraq and identifies some of the main roadblocks in the way of transformation of this forces into a unified national force of the Iraqi Kurds.

My forthcoming book (project) is an investigation of Iran’s environmental and ecological challenges, inspired mainly by the CSoS. Iran’s multiplied environmental movements, from a centre-periphery perspective, would be investigated. What distinguishes my research from the existing literature around this topic is that in my research, I move from the traditional focus on the Centre and pay attention to the environmental movement and ecological struggle of non-Persian people and communities (i.e. the Kurds, Arabs, and Baluchis) in Iran, conceptualised as the environmentalism of the subalterns, and the platform provided by this movement to produce counterhegemonic discourses to the Iranian state’s discourse of ‘security’, ‘identity’ and ‘development’.

I am also part of the teaching and research centre; Centre for Kurdish Studies | University of Exeter

I have obtained my BA and MA accordingly in Arts in Public Administration and International Politics and Global Sociology, from the University of Roskilde (RUC)/Denmark. I have obtained my PhD in Kurdish Studies from the Centre for Kurdish Studies at the University of Exeter. In my doctoral research I have examined the 20th-century’s Cross-border Iranian-Iraqi Kurdish Movements’ Interaction and effects of this interaction of the Mobilisation of the Iranian Kurdish Movement.

Prior to my lectureship I did a year of postdoctoral research, at the centre for Kurdish Studies at the Univerity of Exeter. Through this period I have researched and published studies with focus on developments as state’s securitization of the Iranian Kurdistan, and armed clashes and popular uprising emerged in this region.