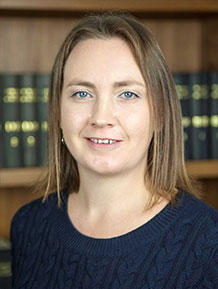 Change in the Law is needed to address male bias, power and privilege in society more generally.

Dr Charlotte Bishop, lecturer and researcher, talks about her experiences as a female academic and single parent, and how her personal experiences, which she has spoken about previously in an account of her own pathway to law, resonate with her understanding of the masculine bias of the law. She believes the law is one of the central institutions where change is needed if we are to address male bias, power and privilege in society more generally.

‘It is hard being a single parent as an academic.  It’s the double-bind women experience everywhere: you don’t feel you do a good enough job as a parent or as a worker. Though the hours are often flexible, the down side is it is easy to work all the time because work can, and usually is, taken home - it can be hard to draw the line. Plus female academics tend to find students have expectations of them providing pastoral support, which male colleagues don’t experience as often, and whilst this is often rewarding, it can be emotionally draining as well. The positive aspect of being a single parent are it makes these boundaries clearer – work has to stop at a certain time every day and I feel I am more productive in the time I do have because of this.’

‘I teach a Gender, Sexuality & Law module in which motherhood & the way the law & society constructs motherhood is covered. We also look at issues around domestic abuse & sexual violence & gender discrimination within the law, linking a lot of it to the masculine bias of the law. If we want to change society we need to change the law because the law is such a powerful discourse. It constructs knowledge and norms and expectations, but because it is seen almost as a science, as objective truth, it is not recognised to be doing this. People think the law is objective & neutral but it’s not. Nothing can be objective really, and, as feminist theory highlights, the objectivity within the law is often a masculine point of view in disguise. The doctrine of precedent also serves the function of hiding and perpetuating the status quo.’

‘The course opens students’ eyes to the gender bias within the law and helps them reframe what they have already covered in the first two years of their degree. Those who then enter the profession are equipped with the understanding that there are all these barriers faced by not just women but anyone who doesn’t conform to the white, male, able-bodied, privileged legal actor.’

‘There is more we can do around teaching. What are we equipping our future lawyers with is their ability to really evaluate & critique the law and expose the biases and barriers within it. We often celebrate individual people who have been able to overcome huge adversity and succeed in the legal profession, but it is important to remember this doesn’t mean everyone will be able to do this - the barriers are huge & the focus should be on striving to remove rather than overcome the barriers’.

‘Before the age of 25 there are equal numbers of male & female solicitors in practice. After 25 the pay gap becomes massive and the numbers of females in the profession drops. It is hard to retain female lawyers because of the normalisation of long work hours (which are seen in academia too), plus the masculine culture of the fraternal bonds - networking, golf, drinking, male dinners, all are still a very common way of securing and retaining business. All of these things make the demands of motherhood and other caring responsibilities hard to balance with the demands of the profession, even though not being able to partake in these activities doesn’t really affect women’s ability to be a good lawyer. Huge levels of sexual harassment are also experienced in the profession – there was a big study on this published last year.’

‘It is hard to be a woman and a feminist academic within law. Research shows female academics get more negative feedback from students, both in terms of research and teaching. We have to do more to prove ourselves as being credible & competent. I am currently conducting a research project on this with a colleague at Kent, Dr Marian Duggan who is a criminologist. We have funding to look at feminist academics’ experiences of incorporating gender & intersectional issues into their teaching of criminal law & criminology. If we are going to address the bias and discrimination within the criminal justice system we need our future police officers, crown prosecutors, judges and so on to be aware of these issues during their degree, but often when we try to incorporate gendered perspectives into our in teaching we meet resistance & backlash, so bringing about change is problematic.’

‘In the study we will be looking at how academics can be supported to incorporate more diverse perspectives into their teaching. We have only a small grant and the research needs to be finished by January next year, but we hope it will become part of a larger study with impact across a broad range of legal education. We will be starting with criminal law, criminal justice and criminology, running questionnaires & focus groups with feminist academics who teach in these areas. In the future I would be interested to hear the experiences of alumni who are professionals & practitioners in criminal law and have been exposed to these issues in their undergraduate learning, or wished they had been, and to hear of any barriers and direct or indirect discrimination they feel they have experienced as a practitioner who doesn’t conform to the stereotypical conception of a lawyer.’