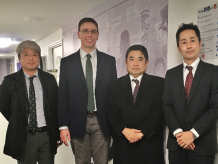 The delegation was lead by Mr Takekuni Ikeda, Director General of the Executive Office of the Governor

On 10 January 2019, the Exeter Centre for International Law hosted a delegation from the Okinawa Prefectural Government. Lead by Mr Takekuni Ikeda, Director General of the Executive Office of the Governor, the delegation came to Exeter to gain a better understanding of the rules of international law governing the status of visiting armed forces.

Okinawa is home to just over 70 per cent of all military bases used exclusively by United States forces stationed in Japan. This is despite the fact that Okinawa makes up a mere 0.6 per cent of Japan’s total land area. The high concentration of US forces has meant that Okinawa and its residents have borne a large share of the inconveniences associated, inevitably, with the presence of US forces in Japan. These have included ongoing concerns over environmental protection, noise pollution, military accidents, criminality and stymied economic development linked to the presence of US bases on Okinawa.

In Exeter, the Okinawan delegation met with Dr Aurel Sari, Director of the Exeter Centre for International Law, to discuss the legal principles applicable to the presence of visiting forces. The status of US armed forces stationed on Okinawa is governed by an international agreement concluded between the US and Japan in 1960. Although the agreement addresses a broad range of matters, from driving permits to the operation of post offices, it does not resolve all questions arising from the presence of US forces. The Okinawan delegation was therefore keen to learn about the underlying principles of international law and the legal position of US forces based in the United Kingdom, drawing on Dr Sari’s extensive expertise in this field.