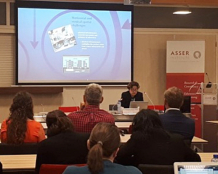 Earlier this year, Dr Agnieszka Jachec-Neale gave a series of presentations in The Hague on the challenges posed to the concept of lawful targets in armed conflict by the complexities of the modern battlefield.

On 25 May 2018, Dr Agnieszka Jachec-Neale co-led an academic-practitioner workshop for the staff of the International Criminal Court Chambers, including judges and around 30 legal officers. During the first part of the workshop, she introduced the concept of military objective under the law of armed conflict and outlined various aspects of the definition. Dr Jachec-Neale then reflected on the practical aspects of applying the concept in contemporary targeting practice. She was followed by Lt Col Christian De Cock from the Belgian Ministry of Defence, who offered an overview of the targeting process and the challenges associated with dynamic targeting.

Speaking later on the same day before a general audience of the International Criminal Court as a part of Office of The Prosecutor seminar series, Dr Jachec-Neale discussed two aspects of contemporary targeting practice in which the concept of military objective may be subject to an overly expansive interpretation: tunnel warfare and strikes on oil infrastructure. Dr Jachec-Neale first offered some reflections on how fighting in urban environments will shape future armed conflict, drawing in part on a report she co-authored on the future evolution of the international legal system (International Law in 2050). She cautioned against treating all of the tunnels as satisfying the definition as lines of communication under the ‘nature’ criterion of the definition of military objectives (comprehensively discussed in her monograph) and proposed instead that such objects are more appropriately analysed under the ‘location’ or ‘use’ criteria. Dr Jachec-Neale then gave an insight into her ongoing research regarding coalition airstrikes on oil infrastructure in Syria and Iraq over the past three years. She concluded that the US may still be the only state that promotes a broader interpretation of the concept of military objective so as to extend it to targets based on their ‘war-sustaining’ capability. She observed, however, that the pressure to counter terrorism may compel other coalition partners to follow suit and accept the lawfulness of targeting at least certain types of war-sustaining objects, such as cash stores and oil producing and refining facilities.

Dr Jachec-Neale concluded her visit to The Hague by with a presentation on controversial targets at the T.M.C Asser Institute on 29 May 2018. Building on her earlier talk at the International Criminal Court, Dr Jachec-Neale further expanded her discussion of warfare in heavily populated environments, focusing in particular on challenges relating to fighting above ground. This event was organised as a part of the Hague Initiative for Law and Armed Conflict (HILAC).