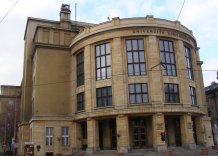 Comenius University, the oldest university in the Slovak Republic.

On 27 September 2017, Dr Kubo Mačák spoke at an international conference with the theme “Cyber Security: New Challenges” in Bratislava. The conference was organised by the Department of International Law and International Relations at the Comenius University, the oldest university in the Slovak Republic.

The conference brought together experts on international law and cyber security from several European countries. The day began with a discussion of the development of international legal regulation of the cyber domain and the challenges that cyberspace poses for sovereignty, due diligence, and the law of armed conflict. It then moved on to consider the lawfulness of cyber espionage under international law. Further contributions focussed on the desirability of codification of international cyber law and actual operational practice of intelligence services in the cyber domain.

Dr Mačák’s contribution was prepared in the context of the project “The Impact of the Law of Armed Conflict on General International Law”, developed and implemented in collaboration with the University of Reading (more information).