On 20-22 September 2017, the Exeter Centre for International Law supported the International Society for Military Law and the Law of War, together with the University of Melbourne, in hosting a conference in the beautiful city of Bruges in Belgium.

The conference brought together legal experts and practitioners from around the world to address a broad range of contemporary legal challenges, stretching from parliamentary oversight of the armed forces to the right of States to resort to force under international law. Four members of the Exeter Centre for International Law presented their research at the conference.

On 20 September, Dr Aurel Sari spoke on the legal dynamics of hybrid warfare. In his presentation, he explained how legal faultlines and gray zones present hybrid adversaries with an opportunity exploit international law in support of their military operations. From a legal perspective, the essence of hybrid warfare is legal asymmetry, Dr Sari suggested. Western nations and international organisations must therefore increase their capacity to confront the challenges that such legal asymmetry presents. The lively discussion the paper generated was followed in the evening by a more tranquil, but equally enjoyable, beer reception in the city of Bruges.

On 21 September, Dr Agnieszka Jachec-Neale and Dr Kubo Mačák joined Lieutenant Marie Van Hoofstat (Legal Advisor to the Belgian Air Component) on a panel chaired by Professor Michael Schmitt to discuss targeting in complex situations. Dr Jachec-Neale spoke about the legal and operational challenges encountered in urban warfare with a specific focus on the targeting process. Whilst she acknowledged the challenges that complying with precautions involves for the attacking side, she stressed the need to strengthen and elaborate the duties related to precautions in defence undertaken against the effects of attacks, particularly in non-international armed conflicts. Dr Jachec-Neale then reflected on the seemingly ambiguous notion of the ‘reasonable commander’ standard of targeting decisions. She recommends that the concept should be considered in the light of military doctrine’s view of commanders’ understanding of the situation and the decision-making process, and include benchmarks such as knowledge, training, experience as well as analytical and intuitive thinking approaches. The topic of Dr Kubo Mačák’s presentation was ‘Targeting in Complex Situations: Challenges for the Application of IHL in Cyberspace and Outer Space’. He discussed the differences between early predictions and actual State military activities in the cyber and space domains. Against that background, he argued in favour of applicability of the law of armed conflict to each of these domains. He emphasized that accepting that this body of law applies to specific cyber and space operations does not legitimate or encourage such conduct. Finally, Dr Mačák analysed one specific challenge arising in each of these domains: the question whether computer data may become a military objective under the law of armed conflict and the question of lawfulness of attacks against military astronauts in time of armed conflict.

After lunch, Professor Michael Schmitt joined a panel devoted to the UN Charter and the legal bases to resort to the use of force in light of contemporary security challenges. Professor Schmitt spoke on the use of force in cyber space. He began by highlighting the difficulties in setting forth a bright line test for determining whether a cyber operation violates the prohibition on the use of force found in the UN Charter. Professor Schmitt then turned to a State’s right to defend itself using kinetic or cyber means against a cyber attack, dealing with such issues as the nature of the attack that affords States that right and whether States may act defensively before the attack begins. He concluded by lamenting the recent breakdown of efforts in the UN to further clarify how international law applies in cyberspace. 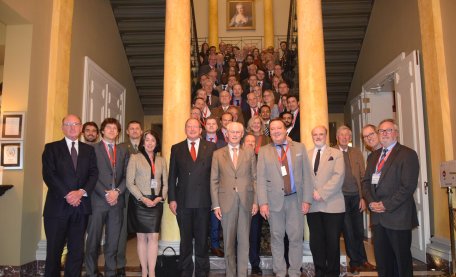