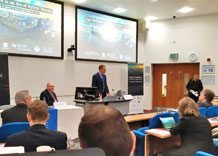 “Legal Resilience in an Era of Hybrid Threats” conference

In April 2019, the Exeter Centre for International Law hosted a conference on “Legal Resilience in an Era of Hybrid Threats” at the University of Exeter. The event brought together more than one hundred representatives from academia, government and international organisations to discuss the legal challenges presented by hybrid threats and gray zone conflict. The conference was held in collaboration with the European Centre of Excellence for Countering Hybrid Threats, the Geneva Centre for Security Policy and the Lieber Institute of the United States Military Academy.

In his opening remarks, Dr Aurel Sari, the Director of the Exeter Centre for International Law, recalled that recent years have seen the return of a more antagonistic international environment marked by increased competition between the great powers. The twin notions of hybrid threats and gray zone conflict are widely used to describe this new reality. From a legal perspective, these concepts focus our attention on the vulnerabilities of the international legal order. This, in turn, raises the question of how international and domestic legal systems can be made more resilient against manipulation and abuse.

The first day of the conference was devoted largely to exploring the conceptual aspects of the subject. An inspring keynote speak by Matti Saarelainen, Director of the European Centre of Excellence for Countering Hybrid Threats, was followed by panels on the legal dimension of hybrid threats, the use of lawfare and the notion of resilience. A panel exploring the recent maritime incident in the Sea of Azov completed the day. The second day featured panels on the challenges and opportunities presented by gray zone conflict, influence operations, competition below the level of force and the use of lawfare in armed conflict. Before lunch, Major General Mitch Mitchell, Director of Development, Concepts and Doctrine Centre at the Ministry of Defence, offered an overview of current strategic trends. The final day focused on policy responses and options, including a panel on counter-measures against lawfare and the constituent elements of legal resilience.

Papers arising from the conference will be published in a volume edited jointly by Dr Aurel Sari and Professor Mitt Regan (Georgetown).