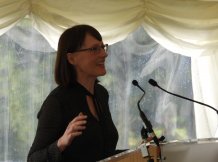 Where and how can one get married in England and Wales, and why is the law here more restrictive than in other jurisdictions?

On 28 September 2017, Professor Rebecca Probert addressed the first National Convention for Celebrants at the National Memorial Arboretum. The convention brought together celebrants, religious officiants and registration officers from across the UK. Presentations covered the regulation of celebrants, their role within the system and the content of ceremonies.

Professor Probert showed how the current complex rules can only be understood by looking at the way that the law has evolved over the past two-and-a-half centuries. She also highlighted the uncertainty of the current law, since a significant failing of the current legal framework is that it does not identify with sufficient clarity what makes a marriage. As she pointed out, different rules apply to different religious groups and different aspects of the ceremony (the words, location, or officiant) assume importance depending on the particular type of wedding. There are also significant limitations: in England and Wales, unlike many other jurisdictions, it is not possible to have a legal ceremony of marriage outdoors, or to be married by a humanist celebrant, or to include religious content in a civil ceremony.

If you have married in England in a non-religious ceremony since 1 January 2015, or have met a registration officer to plan such a wedding, and would be interested in taking part in this research, please email Wedding-Survey@open.ac.uk.