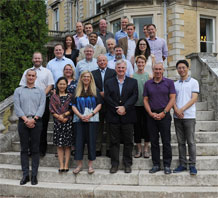 Woomera Manual experts during the Exeter session of the project (August 2018).

The first meeting of the Woomera Manual on the International Law of Military Space Operations was held at Exeter Law School between 5 and 9 August 2018.

Over thirty global experts on international law and space security gathered in Exeter to discuss international legal rules applicable to military space operations. The meeting saw the formal launch of the Woomera Manual project, the mission to develop a Manual that objectively articulates and clarifies existing international law as it applies to military space operations. The University of Exeter is one of the project’s founding institutions and is represented in the group by three academics: Professor Michael Schmitt, Professor Hitoshi Nasu, and Dr Kubo Mačák.

Professor Nasu took a leading role in organizing the Exeter session. He said: “We had a very productive week and it was rewarding to see the project officially commencing at Exeter.” The meeting was formally opened by Dr Aurel Sari, Director of the Exeter Centre for International Law, who noted that “there is an urgent need to settle various legal issues as military activities intensify in the outer space domain.” The discussions focussed on a wide range of topics, including the prohibition of weapons of mass destruction in outer space, the protection of civilian satellites, or the limits on the permissible use of force in self-defence in the space environment. Professor Schmitt added: “I am confident that the manual will be successful and that it will have a lasting impact on the relevant conduct of states.”

The Woomera Manual aims to be an objective statement of existing international law as it applies to military space operations. The key target audience of the Manual includes government lawyers (especially military lawyers), policy-makers, decision-makers and military space operators. However, it is also expected to spark interest and debate in the wider society and internationally, as well as serving as a platform for further academic debate and research, particularly as legal principles and policies are further developed in response to changing political realities and the evolving global security environment.

More photos from the meeting are available here.