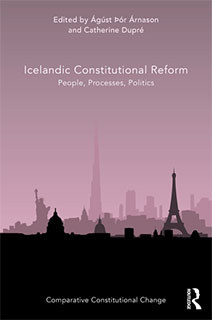 Catherine Dupré co-edits the first comprehensive analysis of the constitutional reform undertaken in Iceland in the wake of the 2008 pots and pans revolution.

In the aftermath of the global financial crisis of 2008, Iceland decided to reform its constitution. This led to a ground-breaking reform process that is the first of its kind in the 21st century.

This collection documents, analyses, and reflects on the Icelandic constitutional reform between 2009 and 2017. It offers a unique insight into this process by providing first-hand accounts of its different stages and core issues. Its 12 substantive chapters are written by the main actors in the reform, including the Chair of the Constitutional Council that drafted the 2011 Proposal for a New Constitution, the Prime Minister and the President of the Republic of Iceland.

Part I opens with an address by the President of the Republic and positions the constitutional reform in its full complexity and longer-term perspective, going beyond the frequent portrayal of that process in international discussion as being solely a result of the 2008 financial crisis.

Part II offers a nuanced and contextualised reflection on Iceland’s innovative approach to consultation and drafting involving lay participants, including its twenty-first-century digital take on ‘the people,’ which attracted international attention as ‘crowdsourcing.’

Part III analyses the main constitutional amendment proposals, and focuses on natural resources and environmental protection, which lie at the heart of Iceland’s identity.

The final part reflects on the reform’s wider significance and includes an interview with the current Prime Minister, who is now taking the reform forward.