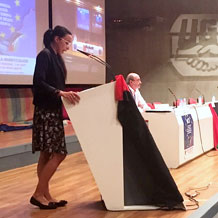 Meriem has participated in a number of high-profile conferences and meetings throughout Europe.

Meriem, a PhD candidate at the College of Social Sciences and International Studies, has spent recent months conducting interviews as part of her research on the conflict in Western Sahara. The interviews took place in London and New York where she gained valuable insights from, among others, Aminatou Haidar, one of Africa’s most prominent human rights activist and Nobel Prize nominee.

Against this background, Meriem is evaluating the extent to which human rights monitoring and protection mechanisms can play a part in advancing the current process towards a peaceful resolution of the conflict in the Western Sahara. She has a particular interest in the issue regarding the right to access natural resources and their management by a people living in a Non-Self-Governing Territory. To that effect, she has been invited to join a panel at the next World Congress of the International Political Science Association due to take place in Lisbon next summer under the title: “Why do natural resources matter in the Western Sahara conflict: Actors and Strategies”.

In addition to working on her thesis, Meriem has participated in a number of high-profile conferences and meetings on the subject of the Western Sahara throughout Europe. She is a member of the steering committee of the International Academic Observatory on Western Sahara at the University of Paris Descartes. As such, she has participated in a pluri-disciplinary colloquium in Amiens earlier this year on the legal, economical, anthropological and social questions raised by the situation in Western Sahara.

Meriem has recently been offered a placement at the European Parliament in Brussels where she will be working closely with the Human Rights Advisor to the Greens/EFA group, looking specifically at the relations between the EU and Western Sahara.