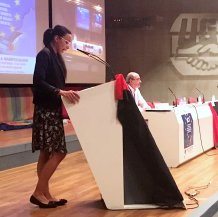 Against this background, Meriem is evaluating the extent to which human rights monitoring and protection mechanisms can play a part in advancing the current process towards a peaceful resolution of the conflict in the Western Sahara. She has a particular interest in the issue regarding the right to access natural resources and their management by a people living in a Non-Self-Governing Territory. To that effect, she has been invited to join a panel at the next World Congress of the International Political Science Association due to take place in Lisbon next summer under the title: “Why do natural resources matter in the Western Sahara conflict: Actors and Strategies”.

In addition to working on her thesis, Meriem has participated in a number of high-profile conferences and meetings on the subject of the Western Sahara throughout Europe. She is a member of the steering committee of the International Academic Observatory on Western Sahara at the University of Paris Descartes. As such, she has participated in a pluri-disciplinary colloquium in Amiens earlier this year on the legal, economical, anthropological and social questions raised by the situation in Western Sahara.

Meriem has recently been offered a placement at the European Parliament in Brussels where she will be working closely with the Human Rights Advisor to the Greens/EFA group, looking specifically at the relations between the EU and Western Sahara.