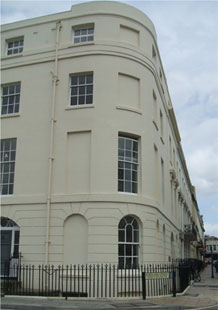 A house in Portland Street, Southampton, with bricked-up spaces in place of windows
(By Whilesteps - Own work by uploader Gary Burt (myspace/slowsmile), CC BY-SA 3.0)

The Selden Society, founded by F.W. Maitland in 1887 to encourage the study and advance the knowledge of the history of English Law, is the only learned society and publisher devoted entirely to English legal history.

The lecture was entitled The Taxation of Georgian Luxury: An Insignificant Orthodoxy?

In a richly illustrated lecture, Professor Stebbings described the late eighteenth-century view that taxes should be laid on ‘the elegant conveniences of life’ on the theory that the ‘first weight of taxation ought to fall on the rich and opulent’. In fact, ‘luxuries’ encompassed not only such expensive items as carriages, but also hair powder, windows, medicines and even dogs.

In the lecture, she demonstrated how these taxes, though perfectly suited to the needs of Georgian society and its pre-industrial economy, were not ephemeral or mere historical curiosities. On the contrary, in various ways they provided the conceptual innovations and new administrative constructs which directly led to the introduction of the income tax and the modern fiscal system. It was the luxury taxes which first established the notion of routine involuntary taxation; that introduced the government revenue official into the administration of direct taxation; and that were largely responsible for introducing the informal practices of the revenue departments as a key element in the administration of tax.  As such, the luxury taxes were significant far beyond their undoubted contemporary impact, and profoundly so.