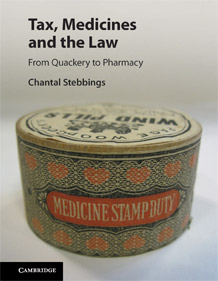 Professor Chantal Stebbings' latest book - 'Tax, Medicines and the Law' - examining the medicine stamp duty from 1783 to 1941 is published by Cambridge University Press.

It examines a little-known but long-lived tax, the medicine stamp duty. In 1783 a stamp duty was first imposed on proprietary or quack medicines, sold commercially without the need for a prescription. These often useless and sometimes dangerous remedies were immensely popular. The tax, which lasted until 1941, was imposed to raise revenue for a government in financial straits. It also had an incidental regulatory purpose, but this failed in that the stamp came to be perceived as a guarantee of quality, though the tax had a positive effect in encouraging the disclosure of the formulae of these medicines.

The book explains the considerable impact the tax had on chemists and druggists – how it led to an improvement in their professional status while at the same time undermining it by reinforcing their reputation as mere traders. The legislation imposing the tax was complex, ambiguous and never reformed in almost 160 years. The tax authorities had to administer it, and executive practice came to dominate it. A minor, specialised, low-yield tax is shown to be of real significance in the pharmaceutical context, and of exceptional importance in the legal context as a model revealing the wider impact of tax law and administration.

This is Professor Stebbings' fourth monograph for the Press, and the research on which it is based was funded by the Wellcome Trust.