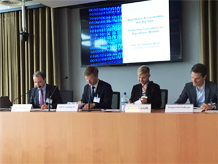 International conference at the University of Amsterdam in cooperation with the Centre for the Study of European Contract Law (UvA) and the Journal of European Consumer and Market Law (EuCML).

On Friday, 13 April 2018, Joasia Luzak has organised an international conference at the University of Amsterdam in cooperation with the Centre for the Study of European Contract Law (UvA) and the Journal of European Consumer and Market Law (EuCML).

The first session introduced more general issues related to the use of consumer data in online transactions. Professor Polanski (Kozminski University, Poland) questioned whether security of consumer data can ever be guaranteed online. He discussed three rights related to data portability: the right of users to receive their personal data; the right of users to transmit their personal data to data controllers; and the right of data controllers to transmit personal data of users amongst themselves. It is this last right that is very risky and requires a major investment, potentially changing data portability into a Pandora’s box. Professor Tjong Tjin Tai (Tilburg University, the Netherlands) lent his support to a controversial idea, the idea of introducing a concept of data ownership, in his presentation. In his view, there is a need to identify data owners to facilitate users' data protection. Professor Helberger (University of Amsterdam, the Netherlands) disagreed with this view and even questioned the necessity of perceiving data as payment for the provision of online (free) services. According to her, 'paying with data' is a dangerous and misleading analogy, as for instance service providers do not own data that is given to them in an online transaction, contrary to the money they would have received if data was not transmitted.

The second session moved into more complex issues of data economy. Professor Busch (University of Osnabrück, Germany) illustrated some of the issues of consumer protection related to the use of algorithms and big data in the online marketplace. He argued that there needs to be more streamlined algorithmic accountability both in private and public enforcement, even though, in his opinion, it is the public enforcement that will be on the rise (with algorithm auditing and impact assessments). Professor Lundqvist (Stockholm University, Sweden) then moved the discussion into the area of competition law, as its rules may ensure fair competition in the market and, therefore, consumer protection. Data pooling that occurs at the moment may result in the tipping of markets through network effects. Even though then data pooling may be more efficient in some industries and facilitate innovation (e.g. in health sector), it is also dangerous for competition law as it may lead to easier collusion and abuse of dominance.

The final session looked into some of the opportunities that data economy creates for consumer protection. Professor Hoofnagle (UC Berkely, US) illustrated results of his empirical studies examining privacy policies of smart TVs and home assistants, such as Amazon Alexa or Google Home, discussing a possibility for service providers to design them in a way leading to consent. Professor Ranchordás (University of Groningen, Netherlands) also focused on new technologies—smart cities—and the position of consumers as citizens and vice versa. Whilst the status of a citizen entitles anyone to receive services, the status of consumers comes with freedom of choice. Which could be more beneficial and more societally responsible in the future? Would a status of a citizen-consumer empower us or increase inequalities in our societies?

All the discussions, which were lively and engaged the audience, were moderated by representatives of both the CSECL and the EuCML. We are now looking forward to reading the written version of all contributions in a special issues of EuCML on this topic - issue 4/2018!