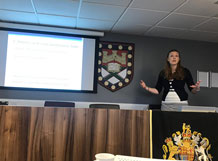 Dr Karen Walsh, Dr Naomi Hawkins (Exeter) and Dr Aisling McMahon (National University of Ireland, Maynooth) were inspired to set up the Patent Scholars Network, based on their experiences at work-in-progress conferences and meetings in the UK and the USA. There is much to be gained from closer involvement with others working in patent law and the Patent Scholars Network has been established to enable that closer engagement.

The first meeting of the network was held in Exeter on 11 and 12 April and was attended by scholars from the UK and the Republic of Ireland. All attendees presented papers and benefited from lively discussions and feedback on their work, and discussions continued over dinner between the two days of the meeting. There has been great interest in the network from scholars. Our first meeting was very productive, and we are looking forward to meeting again in Maynooth in June.