Reframing stop smoking services in response to e-cigarette use: An exploratory stakeholder study

Understandings of Type 2 Diabetes in 'at risk' families 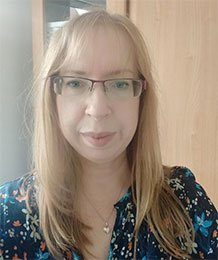 My primary research interests are:

Member of: Society for Study of Addiction, Society of Evidence-Based Policing

Most papers full text on ResearchGate and AcademicEdu.

Boyd, K., Farrimond, H., and Ralph, N. (2018) The impact of breathalysers on violence and attitudes in the Night-Time Economy, European Journal of Criminology (in press).

Farrimond, H. (2017) A typology of vaping: Identifying beliefs, motivations for use, identity and political interest amongst e-cigarette users, International Journal of Drug Policy, 48: 81-90.

Farrimond, H. (2012) Beyond the caveman: Rethinking masculinity in relation to men's help-seeking. Health: An Interdisciplinary Journal for the Social Study of Health, Illness and Medicine, 16 (2): 208-225.

Q-Step Centre for Quantiative Methods at the University of Exeter (£1.2 million), start 2014 for five years, Academic Lead for SPA department

This project extends an evaluation of a pilot breathalyzer scheme in Torquay conducted with South Devon police and DCI Neil Ralph which found almost a 40% reduction in violent crime during the month long trial. Initial research showed that some bouncers/door staff though the breathalyzers 'reconfigured the violent encounter' at the doors of pubs and clubs. This subsequent grant looks at the roll-out of the scheme in a location in Dorset (Weymouth) and across a number of locations in Devon and Cornwall (follow-up in Torquay and Truro), evaluating not only the effectiveness of the scheme in terms of crime figures but also its acceptability to the stakeholders (door staff, licensees and managers, the general public) as well as reflecting more widely on the use of new technologies in the surveillance environment of the current UK night-time economy.Two reports, useful for police forces considering introducing such schemes, can be requested from Dr Farrimond.

This project builds on previous work conducted by Farrimond (2016) e-cigarette users (vapers) responses to the current regulatory environment. Funded by Cancer Research UK, it asks how stop smoking services, which are experiencing declining numbers but targetting the most socio-economically deprived and multiply vulnerable groups (e.g. those with mental health issues, pregnant women) are responding to the e-cigarette debate in their everyday practice. The debate has divided public health; the question is how do those on the ground advise and strategise in this controversial environment and how can best practice on e-cigarettes be developed (e.g. through 'e-cigarette friendly services). Interviews are being conducted with stop smoking services across the South-West, with both staff and clients giving their views. Ethnographic work in vaping shops is also being conducted. This research will also speak to national and international policy debates in Tobacco Control beyond the UK Stop Smoking Service

This project involves staff members from the University of Exeter and the Devon and Cornwall Police Force working together to build capacity in evidence-based policing (Boyd, Rappert, Farrimond, Lang, Pearson). My particular role has focused on delivering training in evidence-based policing workshops, particularly in qualitative methods and research ethics. I have also led the workstream on Addiction, leading to the successful application of the #RU2Drunk project, as well as a police/academic writing collaboration on research ethics. The project has an international dimension, with the addition of an ESRC Impact grant to collaborate with the South African Police through the Institute for Security Studies, where a joint Evidence-Based policing workshop will be held.

Q-Step Centre for Quantitative Methods at the University of Exeter (£1.2 million), start 2014 for five years, Academic Lead for SPA department.

I am interested in supervising PhD's in the following areas

Courtney Buckler, 1 + 3 ESRC studentship on The role of evidence-based practice discourses in medical training and practice.

Rosanna Mead, PhD candidate on An ethnography of music-making on dementia-friendly wards.

I hold an ESRC IAA Impact Award and am contributing to a REF case-study on evidence-based policing:

My PhD in Psychology on 'Smoking Identities in Higher and Lower Socio-economic Groups in the UK' was awarded in 2007 by UCL.