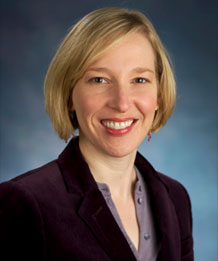 Prof. Amy McKay (Ph.D., Duke University, 2006) studies the politics of policymaking with particular focus on the role pressure groups play in writing legislation and regulation. She has published a number of articles on lobbying in the U.S. In 2008-9 she served as an American Political Science Association Congressional Fellow, working for a U.S. senator on health reform legislation (the Affordable Care Act, also known as Obamacare). Previously, she held research and teaching positions at Georgia State University and the University of Iowa.

Prof. McKay specialises in the influence of organized interests—and their money—over state government decisionmaking. Her research shows that in general, interest groups do not exert undue influence over policy decisions made by governments, but occasionally, interest groups do successfully use money to tip policy decisions in their favour.  Her research appears in Political Research Quarterly, Public Choice, and American Politics Research, among other outlets.  She is now writing a book on the influence of interest groups on the health reform bill in the US better known as Obamacare.  She attended Duke University and Rice University and has also worked for US Senator Kent Conrad and Vice President Al Gore.