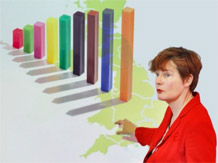 This project was funded by the ESRC under its Secondary Data Analysis Initiative, and ran from 2013-2014.

The number of children diagnosed with childhood developmental disorders, including autism has risen sharply over the last 20 years. The project’s primary aim was to examine whether the proportion of children with the symptoms that underpin autism increased over a ten year period.

The findings from this analysis are discussed in an accompanying podcast and video.

The project also assessed the association between ADHD and socio-economic disadvantage. This led to a PhD studentship for Abby Russell.

Is there an epidemic of autism in the UK?  British Association for Childhood Disability annual Meeting, January, 2015

The development of dyslexia: Findings from the Millennium Cohort, UK. International Conference on Language and Communication, Bangkok, Thailand, Dec 2013.

Dr Ginny Russell is currently a Senior Research Fellow at the medical school and at the Egenis research centre in School of Social Science. Her research encompasses developmental psychology, health services research and sociology. She is the primary contact for questions relating to this project.

Professor Tamsin Ford is an academic child and adolescent psychiatrist. She leads a group of researchers whose work focuses on the effectiveness of services and interventions to support mental health and well-being of children and young people.

Dr Stephan Collishaw is a developmental psychologist at the University of Cardiff.

Professor Susan Kelly is a medical sociologist. She is the leader of the Health Technology and Society research group.

Professor Jean Golding OBE is Professor Emeritus of Paediatric Epidemiology at the University of Bristol.