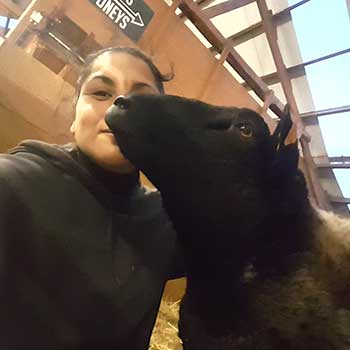 Aàrou is an ethical vegan and activist for social justice; notably radical antispeciesism, but also feminism, antifascism, anticolonialism, lgbtq+, unhoused persons and migrants’ freedom from repression. They apply a total liberation approach to their activism and academic enquiry which focuses on the potential strategies of resistance through complicity and solidarity across anti-oppression movements. Aàrou’s research focuses on the intersection of anarchist and antispeciesist praxis: it investigates the generative potential for interactions between human and other than human animals in liberated (“autonomous”) spaces to enable human collectives to learn and imagine new strategies for resistance and in particular for undoing ‘matrices of domination’ (Collins, 2000: 227 - 8). Aàrou conducts their research principally in vegan animal sanctuaries, but also in other autonomous (free) spaces such as ZADs (zone à defend) and squatted habitations. Aàrou’s work is politically engaged and aims to contribute to revolutionary praxis; concretely to strengthen what they believe to be a necessary and crucial complicity between the movements for (other than human) animal liberation and for human freedom from ‘intertwining’ (Lykke, 2010: 52, 73) social, political and economic injustices. Their analysis is situated broadly within the domains of critical/radical animal studies and queer theory and integrates elements of an ‘ethics of care’. Their research methods include participant observation, participation action research and an emphasis on hermeneutic reflexivity in so much as their own journey as an activist is understood as central to the potential to realize the goals of the research.

Aàrou bases their work on research begun as part of their Anthropology Masters’, which was submitted in 2020. That work interrogated the potential for humans to engage in nonspeciesist ways with animals other than humans, which emerged finally as a largely unobtainable ideal, constrained by the material obligations and inevitable psychological internalisation of speciesist systems that sanctuaries are embedded in. ‘Vegan animal sanctuaries’ shelter species -including humans - that are enmeshed in various states of domestication and of social and interpersonal 'domesecration' (Nibert, 2013: 53). In the place of nonspeciesism, however, discourses and acts of resisting with, and cross-species solidarity (antispeciesism) were discovered. Even where these attempts at a ‘prefigurative politics’ fail, glimpses were seen of a potential for radical autotransformation: through the trials, failures, the undoings and redoings of complex interspecies engagements, vegan sanctuaries were seen to hold promise for the elaboration of novel praxis for the movement to end animal exploitation.

Aàrou has a diverse and varied background in political science, international relations and humanitarian service, notably the struggles of marginalised communities such as armed resistance groups and persons identifying(ied) as female who experience sexual(ised) violence in situations of armed conflict. Otherwise, they have worked in policy and public communications as well as commercial marketing. Aàrou is passionate about incorporating the science of communication (verbal, written, visual and musical) into their critical analysis of the intersection of antispeciesism and anarchism and the development of common resistance praxis.