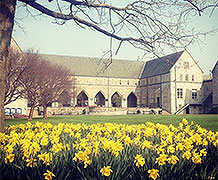 Saturday 18 October is St Lukes Day, and the official date of the 160th anniversary. A ‘Festival of Evensong for St Luke’ will mark the anniversary on Friday 17 October at the St Luke’s Chapel with further celebrations organised next term.

Much has changed on the St Luke’s Campus since 18th October 1854 when new premises were opened for the Exeter Diocesan Training School that had been established in the Cathedral Close in 1839. The occasion was marked by a service in the Cathedral and a grand procession through Exeter. From this date onwards it became known as St Luke’s College.

The first students were all male and were expected: ‘at the least, to read English Prose intelligently, to spell correctly from dictation, to write a good hand, and to work accurately the first four rules of arithmetic, simple and compound, and to have an elementary acquaintance with Scripture History, the Church Catechism, English Grammar, English History and Geography. Any further knowledge he may possess will be so much in his favour.’

In the second half of the 19th century, the college buildings and grounds developed with the chapel added in 1863. A ‘practicing school’ was established where students acted as Assistant Masters and developed their teaching skills. Other developments included the building of lecture theatres, recreation rooms, science laboratories, and even the provision of vegetable gardens and a pig sty.

During the Second World War the college buildings suffered much damage from bombs and the post-war period saw the re-development and expansion of St Luke’s College. It gained an international reputation for physical education with its sports teams often including international players.

The first time that female students were admitted to the college was in 1966 and by early 1970s the move towards an all graduate teaching profession supported by increasing public expenditure resulted in the student population growing to over a thousand.

During the 1970s it was decided that St Luke’s College should join the University of Exeter and in 1978 it ceased to be an independent Anglican college and became part of the University.

Dr Nigel Skinner, the current Head of the University’s Graduate School of Education joined what was then called the ‘School of Education and Lifelong Learning’. There were both four-year undergraduate and one year PGCE courses together with Masters and Doctoral students on the campus which was then devoted entirely to teacher education and professional development, and educational research. Developments on campus since then include the establishment of the School of Sports and Health Science and the Exeter Medical School.

Dr Skinner explained:“Despite all the changes over the last 160 years the Graduate School of Education remains a vibrant and exciting place to study and work. Our PGCE courses are consistently ranked in the ‘Good Teacher Training Guide’ as being in the top three Higher Education led programmes, our educational research is rated very highly both nationally and internationally. We attract postgraduate students from all over the world on to our Masters and Doctoral programmes.”

When it opened the college had just nineteen students who were taught by three teaching staff. The Principal was just 24 years old, somewhat younger than when Dr Skinner became Head of School and numerous other Heads that came before him.

He added:“I’m sure that the founding Principal would be justly proud of all that has been achieved on the St Luke’s Campus since 18th October 1854. Despite the pressures on the role of Higher Education in preparing the next generation of teachers I am confident that we can build on the legacy of the last 160 years to develop our strengths in teaching and research for many years to come.”