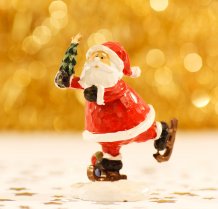 A third of people wished that they still believed in Santa

It’s that time of year when children look forward to a stocking full of presents - but the first international academic “Santa survey” shows many adults also wish they still believed in Father Christmas and some had felt betrayed when they discovered the truth.

The study also shows the threat of being on Santa’s naughty list doesn’t work for many children, and many youngsters continue to pretend they believe in Father Christmas even when they know he doesn’t exist.

Errors by bumbling parents are the also one of the main reasons children lose their faith in the magic of Father Christmas.

Psychologist Professor Chris Boyle, from the University of Exeter, asked people around the world to tell him how they changed their minds about Santa, and if learning that he isn’t quite as he seems had affected their trust in their parents.

Professor Boyle received 1,200 responses from all around the world to his The Exeter Santa Survey, the only international study of its kind, mainly from adults reflecting on their childhood memories.

Professor Boyle said: “During the last two years I have been overwhelmed by people getting in touch to say they were affected by the lack of trust involved when they discovered Santa wasn’t real.

“It has been fascinating to hear why they started to believe he is fictional. The main cause is either the accidental or deliberate actions of parents, but some children started to piece together the truth themselves as they became older.

“As much as this research has a light-hearted element, the responses do show a sense of disappointment and also amusement about having been lied to.”

One survey participant described how they had caught their parents drinking and eating what had been put out for Santa and the reindeer aged ten. An 11-year-old was woken up by their “tipsy” father dropping presents.

Many parents made basic errors which their young children picked up on immediately. One respondent recognised a present given to her sister from Santa as having been hidden in their parent’s room in the weeks before Christmas when she was seven. One participant found their letters to Santa in their parent’s room and another noticed Santa and their father had the same handwriting.

The “Mom and Dad” who signed their names in a book put in a stocking from Santa no doubt felt silly when their seven-year-old realised why the inscription was there. The parents of a child who found shop price tags on their presents from Father Christmas may have felt the same.

It wasn’t just parents who inadvertently spoiled the illusion of Santa. One respondent recognised the school caretaker playing Santa at a Christmas party when she was seven. The teacher of a seven-year-old from the USA no doubt got into trouble with parents when they asked pupils to write an essay about when they found out that Santa wasn't real. Another teacher told their seven-year-old pupils nobody lived in the North Pole.

Other respondents learned the truth because of their growing curiosity about the world as they grew older. A clever child from the USA said at nine they had: “Learnt enough about math, physics, travel, the number of children on the planet ratio to the size of the sleigh to figure it out on my own”. A respondent from England stopped believing at eight because nobody could explain to them why Father Christmas didn’t bring food to children in “poor countries”. One nine-year-old set a trap and wrote a secret letter to Lapland which wasn’t given to their parents, nothing from that list arrived from Santa on Christmas morning.

Many children had realised Santa didn’t exist when they became aware of how goods were bought and sold, and because they realised it would be impossible for one man to deliver toys to everyone. One child had realised aged for that “It was impossible for such a fat man to fit down the chimney”. Others realised reindeer couldn’t fly, and Santa would have been hurt coming down a chimney when a fire was lit.

Some parents had been confronted by their children when they heard rumours from their friends that Father Christmas wasn’t real. One seven-year-old punched a boy at school who said Santa didn’t exist and made his nose bleed. When his mother was summoned to the school he said he attacked him because it was wrong to lie, and he ended up believing in Santa for another three years.

Some parents were forced to tell their children the truth because the idea of Santa scared them, including the mother of a five-year-old who was frightened of a strange man coming into their room.

The study is ongoing and further results will be published in 2019.