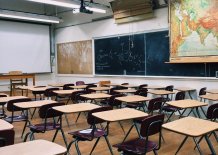 Poorer pupils most likely to be away from school at the end of 2020, researchers tracking coronavirus learning loss have found

Poorer pupils were most likely to be away from school at the end of 2020, experts analysing the learning loss caused by coronavirus have found.

At local authority level, each 10-percentage point increase in the proportion of pupils eligible for free school meals was associated with an extra 1.4 to 1.8 school days missed per pupil over the course of the autumn term.

The analysis, carried out as part of research funded by the Economic and Social Research Council, was conducted by Professor Lee Elliot Major from the University of Exeter and Andrew Eyles and Professor Stephen Machin from the Centre for Economic Performance at the London School of Economics.

The researchers also asked parents of school age children the extent to which they felt they had been able to make up for learning losses during the first lockdown. A total of 86 per cent among the top fifth of earners reported being able either to make up a little or a lot of the lost teaching hours compared to 29 per cent of the bottom fifth of earners.

A total of 71 per cent of parents questioned by the researchers during September 2020 said they thought the long-term risks of not going back to school in the autumn term outweighed the benefits of limiting the spread of Covid-19.

The researchers suggest one option for GCSE and A-level students this year would be to create a one-off special flagging system alongside exam grades, however they are assessed this year, to identify pupils who have been most seriously affected by Covid-19. Universities, colleges and employers would take their extenuating circumstances into account when judging the grades.

Another, more radical, option would be to allow flexibility so pupils could repeat a whole school year if they wanted. The experts support a national tutoring service but warn the current Government backed national tutoring programme is not of the scale needed to address current inequalities.

Mr Eyles said: “There is widespread public support for keeping schools open and reforming exams to make them fairer. Unless pupils are given extra support, the prospects for both absolute and relative social mobility are bleak, with young people likely to do less well than their parents.

Professor Elliot Major said: “Closing schools is one of the most difficult decisions that governments have had to make in their efforts to halt the spread of Covid-19. It is right to consider this as cases peak again, but ministers should also be aware of unequal and long-term damage that learning losses could have on the nation’s children.”