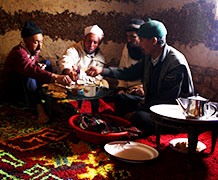 The uncertainties surrounding the long-term prospect of democracy being fully embraced by North African nations embroiled in the Arab Spring rebellions are the focus of a fascinating new book.

The book, called ‘Party Politics and the Prospects for democracy in North Africa’, explores whether traditional political parties have adapted in response to growing demands for democracy in the region in recent years.

Author Dr Lise Storm, a Middle East expert from the University of Exeter examines whether a less authoritarian approach has been integrated, or whether existing parties have simply reinvented themselves to meet today’s expectations.

Dr Storm focuses her attentions on the politics of Tunisia, Algeria and Morocco which together with Libya and Mauritania form the Maghreb region.  These neighbouring countries share a close colonial past, however politically they are significantly much more diverse. Tunisia and Algeria are republics whereas Morocco is a monarchy. The influence of each governing structure shapes the political party systems and therefore each country’s prospects for democracy according to Dr Storm’s research.

The term democracy had rarely been used very optimistically in a Middle Eastern context prior to the Arab Spring.  The protests brought up the question of whether the world was about to witness a democratic Middle East, an Arab world ruled by popularly elected governments, with freedom of expression, assembly which would be protected and respected.

Dr Storm is doubtful, she explained: “The expectations were extremely high, whether in the Arab world or abroad. Taking into account the authoritarian character of the incumbent regimes, the rather loosely co-ordinated nature of the Arab Spring protests, and the lack of explicit commitment from many of the more established political parties early on in the process, the optimism attached to these events as a force for long term, significant political change was, in hindsight perhaps a little naïve.”

The book outlines how the protests in Tunisia were the most effective, largely because they were not anticipated and also because they were difficult to quell due to their intensity and web-based origins.  The demonstrations were largely co-ordinated through Facebook and Twitter, and spread by word of mouth, which was all the more difficult to stop.  There were no headquarters that could be ransacked and closed down, and there was no leader that could be silenced, the headquarters where in cyberspace.

Dr Storm is convinced that had the protests been anticipated, they would have been quelled much earlier on and with much more vigour, using the usual mechanisms of regime control.  This would have been in the form of higher salaries, bonuses, and food subsidies, as well as the promise of the creation of more jobs for the rapidly growing number of unemployed, particularly among the youth.

Although the Tunisian protesters succeeded in toppling president Ben Ali’s regime and in the excitement over the legislative elections, the first free and fair of their kind in the era of post-independence, most Tunisians and international observers forgot to query the nature and democratic potential of the new regime, apart from questioning the compatibility of Islam and democracy. This is the core focus of the book illustrating that the fundamental building blocks to create democratic change were not in place or developed and appear to have been ignored.

The importance of exploring the character of the political parties, the nature of the party system and the structure of the political system vital to democracy went unchallenged. The question being that if the same politicians from old regimes simply reform into new parties how can any meaningful change arise?

The Arab Spring protests in Algeria and Morocco were much more low key, and therefore also had much less political impact than Tunisia.  In Algeria the protesters remained local rather than national in orientation and without a clear or shared objective.  Moroccan protests were more coherent, there was an actual protest movement, the Mouvement du 20 Février, however no agreement had been reached on the way forward for the country.  However, as they were co-ordinated, they were relatively easy for the regime to neutralise as there were clear lines of command to target, not only via repressive measures, but also by means of patronage.

The regimes in Algeria and Morocco were able to respond much faster as they had the advantage of anticipating the spill over of the Tunisian protestor’s grievances which were shared by the Maghreb countries.  This made it easier for the regimes to respond to the protests by prohibiting demonstrations, limiting access to the Internet and introducing food and fuel subsidies.

Dr Storm said: “The presence or absence of opposition parties, the willingness of these to act as vehicles for democracy, and the extent to which the parties and other key actors, such as the army, were co-opted by the incumbent regime affected not only how the Arab Spring unfolded in each country but also the potential for democratic transition and consolidation.”

She added: “Sadly, this conclusion appears further validated by events in recent weeks, and possibly in the coming months, with the Islamist Ennahda - the winner of the Tunisian legislative elections - having just handed over power to a technocrat interim government, and as ageing President Bouteflika prepares to run for office for a fourth time with the support of the majority of the Algerian parties, despite the need for a revision of the constitution to facilitate his candidacy.”