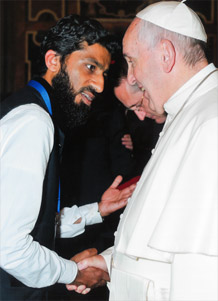 Dr Mustafa Baig of the University's Institute of Arab and Islamic Studies met with Pope Francis in St Peter's Basilica on June 30.

The papal audience was part of conference marking the fiftieth anniversary of the ground-breaking Vatican II declaration “Nostra Aetate”, which opened up new horizons in the Catholic Church’s approach to interfaith relations.

The Institute of Arab and Islamic Studies has an outstanding international reputation, especially for our focus on the Gulf, the Arabian Peninsula and Islamic studies, and a high national ranking for academic excellence. The Institute’s atmosphere is cosmopolitan contributing to a lively, friendly community.