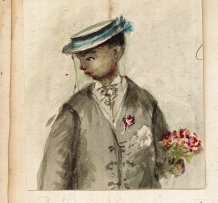 The rediscovery of a unique visit by an African prince to Exeter has encouraged a researcher to find links between the city and the Eritrean Ethiopian region.

Seven-year-old Prince Alemayehu Tewodros was at St David’s Station – possibly on his way to meet Queen Victoria in 1868. Awet Araya, from the University of Exeter, is now working to find other links between Exeter and this part of Africa.

Mr Araya believes the visit could have been linked to the role of Exeter’s Sir Stafford Henry Northcote - who is also linked to the 1868 pillage at Adulis. Finds from the unsolicited excavations in the area following the British Army expedition are now at the British Museum. Many were donated by Sir Stafford, who also proposed the founding of the Royal Albert Memorial Museum and Art Gallery, which has a 20th century headscarf made in Asmara.

Mr Araya is an Eritrean archaeologist and PhD candidate from the University of Exeter’s Institute of Arab and Islamic Studies.

Prince Alemayehu was the son of Tewodros II of Ethiopia, who killed himself after the Battle of Magdala in 1868. He was brought to England by the British Army, and lived in the country for about 10 years, until his untimely death at the age of 18 in 1879.

Prince Alemayehu, an Abyssinian servant and a little Abyssinian girl left Abyssinia from Ras Malkatto, in the Bay of Zula (Eritrea), a temporary narrow-gauge railway and encampment of the British Army in 1868. After a long and unpleasant journey the prince passed by Exeter at lunchtime on Thursday, July 16 1868. They stayed in the first-class saloon at the station before continuing their journey on another train as they headed to the Isle of Wight.

W.B. Tucker, a local artist, used the opportunity to produce one of the only two surviving proofs of Prince Alemayehu’s transit by Exeter St Davids station. The portrait-aquarelle is captioned "Men I have known" and "Prince of Abyssinia at St David's Station". It is now in the Devon Heritage Centre in Exeter and seeing the image prompted Mr Araya to try to discover more about the event and Exeter’s imperial connections to the Eritrean Ethiopian region.

The visit was reported in the Exeter and Plymouth Gazette in detail on Friday, July 17, 1868 with the headline King Theodore's Son at Exeter. The newspaper described the boy as being seven years old, with the name “Dejatch Alamayon, meaning "I have seen the world” - a prophetic name, likely to be fulfilled.” It continued to describe him as: “tall, for his age with “dark-copper skin colour; jet black hair cut close to the head; and thick, prominent lips; a pretty, pleasing child etc”. He was dressed in: “dark knickerbocker suit and striped stockings, having picotee the top button-hole of his jacket, and white pocket-handkerchief, in careless, civilised style, half visible in the outside breast-pocket” and had a “a straw hat, with "H MS Urgent" on the ribbon, that being the name of the ship in which he arrived Plymouth”.

Mr Araya said: “When I first came to Exeter as a PhD student, I never thought there would be any connection with where I come from. In Exeter, I always see statues and place names celebrating the local heroes of Britain's imperial past, but this ‘hidden in plain sight’ story of Alemayehu and Sir Stafford Henry Northcote reminds me how much is forgotten too.

“Various monuments in Exeter stand celebrate Sir Stafford as ‘benefactor and enlightened patron’ of the city. I doubt Alemayehu’s name rings a bell to many when they see these monuments, which reminds me how much we tend to forget victims of Britain’s Imperial ‘heroes’. This is why I wanted to share his Exeter story with the UK public, particularly in a time when many activists and academics are campaigning for his remains to be moved from Windsor back to Ethiopia.”