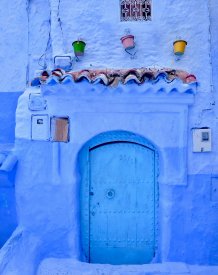 The winning photograph was taken in Chefchaouen in Northern Morocco.

The Annual Year Abroad Photography Prize was won this year by Athena McDonald.

‘I’m a final year student at the University of Exeter, studying for a Masters in Arabic & Islamic Studies. Having lived in four different countries, I enjoy travelling in my spare time and using art and photography as a means to capture these experiences.

‘This photo was taken in Chefchaouen in Northern Morocco. The tiny village is painted entirely blue, making it an incredibly picturesque spot with a mountainous backdrop. I discovered this particular door by accident, off the beaten track. For me, it captivates the ‘toy town’ nature of the whole village. Its size (too small for an adult to enter without crouching!), colour and individual design details give it a quaint but undeniably charming appearance. ‘

The Year Abroad Photography Prize has been running since 2003. It is funded by alumnus David Pryer, (Government & Law 1968) who spent time working in the Middle East in the late 70’s /early 80’s. The competition gives students an incentive to record their experiences in their year abroad and the opportunity to share them with others. David returns each year to present the prizes at the December IAIS Social. Athena also won second prize this year.