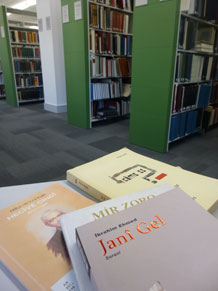 The Centre for Kurdish Studies benefits from Exeter’s large specialist library collections on the Middle East.

The Centre for Kurdish Studies (CKS) benefits from Exeter’s large specialist library collections on the Middle East, and from the presence of AWDU (the Arab World Documentation Unit), which also contains many items of interest to Kurdish specialists – including, for example C. J. Edmonds’ personal maps of Iraq, with his annotations. But the largest special collection we possess is the Omar Sheikhmous archive.

Omar Sheikhmous has generously donated his personal archives to the University of Exeter including, among others, books, PhD thesis, pamphlets, journals and magazines. Thanks to his generous gift the library of Exeter started to build a collection of more than 150 rare Kurdish newspapers and journals (published both in Europe and the Middle East).Omar Sheikhmous visited the University of Exeter and Centre for Kurdish Studies twice in 2012 and assisted the subject librarian at the time, Afzal Hasan, and the head of heritage collection, Christine Faunch, in the process of archiving and cataloguing the material. The archive is now available for use for academic researchers, under ‘Special Collections.’ The blog posts produced by our archivist Dr James Downs are a great way to get a feel for the contents of this collection : Part 1, Part 2, Part 3, Part 4.

The CKS is pursuing its strategy of building up the collection of Kurdish and Kurdish-related titles. We have a comprehensive policy of acquiring books on the subject in Western and Middle-Eastern languages (English, Arabic, French and German are particularly well covered). We have recently acquired almost all Kurdish titles published in Turkey over the past decades. This collection includes in particular classical and contemporary literature as well as folklore published in Kurmanji. Our collection of books recently published in Iraqi and Iranian Kurdistan is also growing.
In addition, we have also acquired a collection of over 700 titles from the former Soviet Union, which includes not only the principal works of the major Soviet Kurdish novelists, but also many scholarly books in Kurdish, Armenian and Russian. We also have a set of the newspaper R’ya Teze from its re-emergence after Stalin’s death until 2006. Exeter now has the most extensive collection of Kurdish material from the former Soviet Union in a European university.

More information about the archive.

For further information, contact the Library’s Liaison Team at library@exeter.ac.uk.