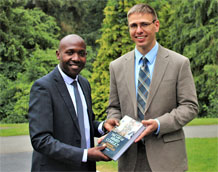 In a fitting close to the academic year, the Exeter Centre for International Law has donated a collection of textbooks on the law of armed conflict to the Defence and Command Staff College of the Defence Force of Zambia.

All armed forces must ensure that their members understand and comply with the rules governing the conduct of hostilities, known as the law of armed conflict or international humanitarian law. Training soldiers of all ranks, from corporals to senior officers, across the different services plays a critical role in this regard.

Several members of the Exeter Centre for International Law have a long-standing involvement in training military officers and government officials in the law of armed conflict and related areas of international law. When the opportunity arose, the Centre was therefore keen to support similar efforts in Zambia. “One of our students this year is Major Fanaaka Chidakwa of the Zambian Defence Force. Thanks to his efforts and enthusiasm, we are delighted to assist in the training of Zambian military officers by donating a set of key texts to the Defence and Command Staff College of the Zambian armed forces,” explained Dr Aurel Sari, the Director of the Exeter Centre.

The Defence and Command Staff College is charged with the responsibility of training senior defence and security personnel in Zambia.