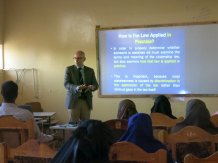 Lecturing at the School of Law at the University of Hargeisa

An update from Mike Sanderson in Africa

As part of on-going research into citizenship law and the prevention of statelessness in the horn of African, Mike Sanderson recently gave a lecture in Hargeisa, capital of Somaliland.

"I recently found myself rather off the beaten-track in the lovely city of Hargeisa, capital of Somaliland.  Somaliland has a very interesting place in world politics.   It declared independence from Somalia proper in 1991, thereby more or less restoring the borders of the former British Somaliland, which was itself briefly independent in June 1960 before joining with the former Italian Somaliland to create the Republic of Somalia.

Although it has not yet been recognized as a state by any other country, in practice it enjoys a great deal of autonomy from the central government of Somalia in Mogadishu.  In fact, the difference in organization is plain to see immediately upon your arrival in the city.  It isn’t so much that you can walk around and visit the various ministries and the new Parliament buildings, which aren’t so very different from comparable buildings you might see in other similar centers around the region, it’s really that you are free to walk around at all.  For anyone who has spent time in Mogadishu, where travel within the city for foreigners is necessarily accompanied by an imposing security presence, the suggestion that you might be able to go for a stroll or stop for lunch in the city comes as rather a shock, albeit a very pleasant one.

I was visiting as part of my on-going research into citizenship law and the prevention of statelessness in the horn of African.  While there, I had the very good luck to be invited to give a lecture on these themes for faculty and staff in the School of Law of the University of Hargeisa.  While I spent some time sketching out the basic principles related to citizenship and statelessness at international law, I spent rather more time discussing the implications of the 2002 Somaliland Citizenship Law and points where, in my view, it diverges from the very progressive aspirations of the 2001 Constitution.  My criticisms were trenchant and I half expected to be escorted from the premises.  Instead, the students and teachers in attendance were open and very reflective about the points under discussion and the seminar was generally infected with a great spirit of curiosity and fun.  I can’t remember when I’ve enjoyed giving a seminar more.  It was an enormous pleasure to be a part of such an active community of legal students and scholars, even if for only an afternoon – and I was delighted to see that the law school in Hargeisa is continuing to carry on the very proud tradition of Somali law and lawyers in the Horn of Africa."