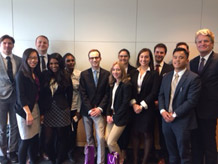 This event organised by the University of Exeter Law School was held at Dentons, London office on the 2 June 2016. Dentons is the largest international law firm in the world.

17 Canadian law students representing the University of Kent, University of Sussex, Queen Marys University London, City University, University of Southampton, University of York and University of Exeter took part in a knock-out competition which was judged by panels of law tutors and Dentons' trainees. The aim was to encourage the development of negotiation skills through simulated exercises focusing on Canadian human rights and ethics. The subsequent heats required strong communication and co-operation, which are qualities valued in global business and legal employment. Each of the competing universities had also had a pre-competition skype training session with Canadian articling lawyers employed in Dentons' Toronto office in March of this year.

Sue Prince, Law Associate Professor, led the event and was joined as a judge by Tia Matt, Lecturer in Law and four law undergraduates Chelsey Gauthier,  Oana Barzuca, Cyrille Panadero,  and Tyler McMurren. Elikem Russell helped with organisation of the event as a whole.

Dentons provided lunch during which the teams were able to think about their approach to the scenario. After lunch, four individual heats took place and the academic lawyers and trainees had to decide upon the most convincing negotiating pair in each group. Once the heats were complete the two teams with the most amount of points were put through to a final which was held in front of an audience of the other competing students. The final was won by Queen Marys who put up a very convincing team. Teams from Exeter came third and fourth.

Feedback was really positive from this event from students, law staff and the trainees. Dentons have agreed that the event was so successful that it will be repeated again next year and although Exeter will organise it, we will also open the competition to a wider number of universities. This will give more Canadian students the opportunity to take part in what was a thought-provoking and vibrant event.