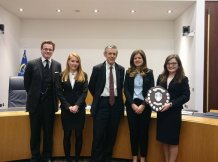 The Grand Final of the Devon Chambers Internal Mooting Competition was held on 2 March 2015 at the Supreme Court, judged by Lord Toulson.

The Final was a very well argued moot, with each finalist displaying their legal mastery and mooting flair as their submissions were challenged by Lord Toulson. With impressive moments of academic brilliance, it was no surprise that the moot was extremely highly contested. Congratulations to all four finalists for such exceptional performance throughout the competition.

The Devon Chambers mooting competition is the largest and most prestigious internal competition at the University of Exeter. Over the past six months, the number of competitors has been gradually whittled down from over 100, to our final four. The competition has involved six rounds of challenging mooting, with problems ranging from Criminal Law and Administrative Law, to Land Law and The Law of Torts, and at each stage, competitors demonstrated excellence of mooting talent and academic diligence.

The Final was attended by students, lecturers, mooters’ friends and family, and representatives from Devon Chambers, who enjoyed a tour of all the Supreme Court courtrooms, watched the moot and celebrated the end of the competition together.

The mooting competition was organized by Emily Au and Gemma Edey, the 2014/15 Mistresses of the Moot. The moot problem for the Final, which centred on Criminal Law, was written by Dr Nathan Tamblyn. The Law School’s mooting programme is supervised by Mr Kubo Mačák, the Director of Mooting.