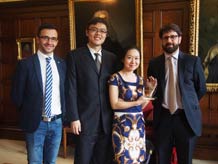 Our mooting team composed of competitors Riyao Liu, Jiannan Lin and Chenxuan Li and coach Richard Mahal successfully participated in the Second Moot Competition on Commercial and Maritime Law held between 20 and 22 June 2015 in Swansea and London.

The team was praised by the arbitrators for its arguments on the points of law and pocketed the award for the best skeleton argument at the event.

This success builds upon Exeter’s strong reputation in national mooting and reflects the academic strength of the Maritime Law programme offered at Exeter Law School.

The competition is organized annually by the College of Law at Swansea University under the supervision of the Institute of International Shipping and Trade Law. The preliminary rounds are held at Swansea with the finals held in London under the auspices of 7 King’s Bench Walk.