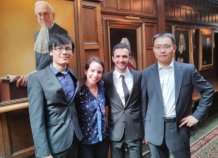 Ruoyu, Sarah, Richard and Feng moments before the final at Middle Temple

The final round was held at Middle Temple before the bench of Mr Justice Flaux, Simon Picken QC and Peter MacDonald Eggers QC of 7 King’s Bench Walk, which sponsored the competition.

The Final marked the culmination of an entire weekend’s competition held at Swansea University in which Richard and Feng and Sarah Hammad and Chu Ruoyu, also representing Exeter, battled against teams from across the country in the preliminary oral rounds.  The team composed of Sarah and Ruoyu performed very well and narrowly missed out on the opportunity to make the Final an all Exeter clash.

Richard and Feng met Swansea University in the Final in a closely contested fight but came out victorious in the unanimous judgment of the bench.  Richard and Sarah also ranked among the best three oralists in the preliminary rounds.

The success builds upon Exeter’s strong reputation in national mooting competitions and it is hoped that it will contribute to the growing student interest in mooting in general and in the study of commercial maritime law.