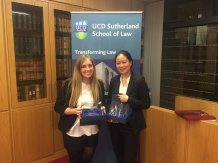 Exeter Team Runners Up at Irish Law Moot in Dublin

The moot was organized by University College Dublin, and sponsored by Matheson. This was Exeter’s first time competing in the competition. The team was coached by Ms Karen Walsh.

When talking about the team’s mooting experience in Dublin, Emmeline commented that “this moot allowed us to practice our oral advocacy, and highly emphasised the importance of thinking on one’s feet during judicial intervention.”

Ellie-Mae added, “for me as a first year mooter, this competition was a perfect opportunity for increasing confidence in the moot room, and I sincerely hope other students get involved, too.’

The Law School’s mooting programme is directed by Dr Kubo Mačák and run jointly with the Bracton Law Society mistresses of the moot (Meghan Bryson and Eleanor Sharrock in 2015/16; Amy Carter and Ellie-Mae Toole in 2016/17).