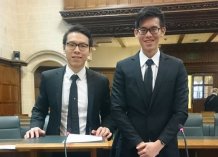 On Tuesday 31st of March, Kevin Ho and Spencer Lee represented the university at the Grand Final of the UKLSA 2014/15 Mooting Competition.

They had mooted excellently throughout the year to gain their well-deserved place in the prestigious final, which took place in the Supreme Court. For the final round, they faced Manchester Metropolitan University and narrowly lost out by one point. The standard of mooting was extremely high and we would like to congratulate Kevin and Spencer on this exceptional achievement.

This is what they had to say about their experience of the competition:

“It was our passion for mooting which drove us to apply for the United Kingdom Law Students’ Association national moot competition 2014/2015.

We decided on this tournament because we felt that it would allow us to hone our advocacy skills, seeing that it was a prestigious tournament which attracts the best and the brightest advocates from all over the United Kingdom where the participants ranged from the top universities in the country to Inns of Court.

The journey to the finals was not easy as we faced former champions of this tournament, Lincoln’s Inn and Plymouth University. However, the adrenaline rush and the sweet taste of victory kept us going through during the hours of research and practice sessions. Our efforts paid off as we were the first team from Exeter University to reach the finals of a national moot competition.

The valuable experience that we have gained from mooting this past academic year is something we will take with us into our future careers. We would like to extend a big thank you to the Bracton Law Society and the lecturers who have given us support along the way as our success would not have been possible if not for their continued help. We hope that our achievement would serve as a motivation to all aspiring advocates in the law school to not shy away from a challenge and to do our university proud.”