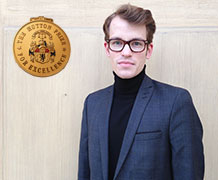 A University of Exeter Law postgraduate student has been awarded the Hutton Prize for Excellence, which encourages the next generation of young professionals to put ethical conduct at the forefront of business, government and the professions.

Hadrien Chautard has been studying the LLM International Commercial Law programme and is the second postgraduate Law student in a row to win the Hutton Prize.

As this year’s winner of the best dissertation demonstrating a commitment to ethical conduct and practice, Chautard won the prize which is a medal containing one troy ounce of solid gold. This is awarded on a yearly basis to an undergraduate or postgraduate student from Politics, Law or the Business School who is able to demonstrate, propose and promote high standards of ethical conduct for the tangible benefit of society or individuals.

Chautard joined the University of Exeter on the LLM from the Universite de Rennes 1, France and wrote his thesis on the topic: 'A critical analysis of the recent condition given to the defensive measures against hostile takeovers in the United Kingdom and a comparative study of their efficiency with the United States'.

It focuses on the controversial takeover by Kraft of Cadbury plc, when Kraft announced during the course of the takeover bid that it would not close down a UK plant if it were successful in the bid. After it obtained control of Cadbury, the plant was shut down and jobs were lost. The thesis explores the regulation of takeover defences so as to protect important societal interests, such as workers' rights.

Professor Christian Witting, Law lecturer at the University of Exeter said: “Hadrien has had a stellar year at Exeter. He has just graduated with a first class honours and has been awarded a Dean's Commendation for his results on the LLM programme. He won this year’s Hutton Prize because of the excellent research and the logic and persuasiveness of the arguments presented.”

At present Chautard is currently on an apprenticeship within the Worldwide Claim Substantiation Division of the L’Oréal group; and is taking part in the development of its communication strategy and the corresponding risks management. He chose Mergers and Acquisitions because he has a special interest in international business strategy and is keen to build a career in this field.

Chautard explained: “I believe that Mergers and Acquisitions is a particularly adequate position to deal with the current environmental and social issues of societies. Therefore, I decided to dedicate my dissertation to the legal mechanisms developed in different national legal systems. This is in order to impose on the leaders and investors of international companies to give greater consideration to the social impact of the decisions they take in the framework of takeovers.”

He added: “I am pleased and honoured to be awarded the Hutton Prize, especially as it is designed to promote the cause of good governance in business and government. I am most grateful to Professor Witting, who supervised the writing of my dissertation which I would not have been able to achieve without his help.”