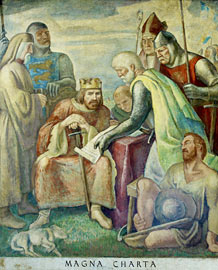 Sealing of the Magna Carta - image via shutterstock

In celebration of the 800th anniversary of the sealing of the Magna Carta a sponsored 10km walk around Exeter’s legal sites on 3 June at 5pm, is being organised by the South West Legal Support Trust with assistance from the University of Exeter’s School of Law and the Devon and Somerset Law Society.

At a time when the need for free legal advice centres has grown substantially, this fundraising event will highlight the importance of the Magna Carta documents and its relevance to access to justice today. Money raised from the ‘Exeter Magna Carta Walk’ will be donated to local advice services that provide legal support to vulnerable people.

Anthony Musson, Professor of Legal History, at the University of Exeter said:“The Magna Carta includes one of the most important clauses in legal history:“to no one will we sell, to no one deny or delay right or justice” highlighting the continuing relevance of the Great Charter in accessing justice today.  It enshrines the values such as the rule of law and due process under it and protected the liberties of the Church and the autonomy of cities such as Exeter.”

The walk includes a tour of Exeter’s legal heritage embodied in a number of key buildings used to create and enforce the law, dating from medieval times to the present day. Locations such as Rougemont Castle administered justice in the period of William the Conqueror who founded the fortification in 1068, which technically lay outside the jurisdiction of the city of Exeter. It conducted the famous trial and execution of the ‘Bideford witches’ who were the last to be tried for this crime in England before its decriminalisation in 1736.

Along the route there is Exeter’s prestigious civic building, the medieval Guildhall which was a forum for pronouncing and enforcing the customs, byelaws and regulations of the city.  It housed the Mayor’s Court which heard cases concerning personal property. The Provost’s Court also at the Guildhall heard debt cases and dealt with trade disputes.

The Mayor and Corporation were frequently at loggerheads over matters of disputed jurisdiction within the city walls, particularly with St Peter’s Cathedral, whose role wasn’t purely religious. The ecclesiastical body exercised jurisdiction over disputes concerning marriage and offences which occurred within the grounds of the Cathedral green.

The powers, duties and responsibilities of educational and religious institutions, alongside the civic authorities and the judicial will be explored. The walk will illustrate the links between the organisations and show the extent to which the significance of the buildings and the groups have developed and changed over time.

Rob Newman, from the Devon and Somerset Law Society and Working Party Chairman for the Magna Carta Event said:“Magna Carta established the rule that no man, and no government, is above the law. Much has changed in the last 800 years, but the need to protect our fundamental freedoms remains as important as ever. We are delighted that the University is marking the anniversary through the Walk, along with the other events being planned jointly with the Law Society, all to be held during June.”

The Exeter Magna Carta Walk is open to everyone, is free to register online or on the day between 5pm and 5.30pm. The marshalled walk starts outside the Exeter Combined Court Centre on Southernhay Gardens and lasts between 1.5 and 3 hours, and officially finishes at 9pm. Further information about the walk and sponsorship arrangements can be found on The South West Legal Support Trust website.

Additional Magna Carta anniversary events include a special lecture with the former Attorney General, the Right Honourable Dominic Grieve QC, who will pose the question of whether we need a new Charter. This is taking place on 12 June at the Mint Methodist Church Centre, Exeter and will follow a talk on the historical background to Magna Carta by Professor Musson from the University of Exeter’s Law School.