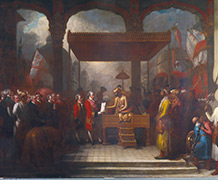 Shah ‘Alam, the Mughal emperor, conveying the grant of the Diwani to Lord Clive, August 1765.

© The British Library Board, Foster 29

The Commonwealth Games is not the only one attracting a global audience, with the opening of an exhibition highlighting what was formerly the highest court of appeal for most colonies of the British Empire.

Visitors to the free exhibition at the Supreme Court in London will be introduced to the story of its international sister court, the Judicial Committee of the Privy Council (JCPC) which at one stage could hear appeals from around a quarter of the world’s population. The JCPC still serves around 30 Commonwealth countries and British Overseas Territories. Numerous athletes who are from these places like Trinidad and Mauritius will be competing at the Commonwealth Games in Glasgow over the coming weeks.

The specially-commissioned exhibition at the Supreme Court will offer snapshots from the caseload of the JCPC from its modern formation in 1833 to the emergence of the Commonwealth in the 1950s. By looking at a range of the JCPC’s cases drawn from across the former British Empire, the exhibition will also explore questions about the relationship between governments, national courts and the international legal order. Visitors will be prompted to consider the nature of dialogue between local and international courts, and tensions between principles of legal equality and the practice of politicised justice.

University of Exeter historians Dr Nandini Chatterjee and Dr Stacey Hynd, and Dr Charlotte Smith, School of Law, University of Reading led an international group of academics working on different contexts from within the British Empire, to explore how law, culture and empire were tied together. The Arts and Humanities Research Council (AHRC) funded project explores how the JCPC served as an evolving hub of the British Empire.  It also looks closely at how its judges applied the common law to both translate and mediate at the crossroads of Britain’s colonial interests, from Australia to Zimbabwe.

Lady Hale, Deputy President of the Supreme Court, who will formally open the exhibition at the end of July, said: “The influence of the Judicial Committee of the Privy Council on the development of many areas of common law is well known, but its historic role in defining the limits of colonial power and recognising the importance of the local laws, culture and practices in the countries it served is less well known.”

Dramatic case studies will draw out the personal impact of the JCPC’s colonial era decisions, in addition to their wider political and legal significance. Stories highlighted include those of a British doctor working in Ghana in the 1920s, who was charged with the murder of his wife. He was tried under Ashanti regulations without defence counsel or jury, and without right of appeal and his subsequent conviction and death sentence sparked an outcry in Britain. Although the doctor’s appeal to the JCPC was allowed on different grounds and his death sentence commuted, his case drew attention to the harsh nature of criminal procedures for African defendants. This helped encourage the Ashanti government to change due process in British West Africa.

Lady Hale added:“The exhibition reminds us that the Judicial Committee was at one and the same time an agent of the imperial power and the protector of the rights of all the inhabitants of the British Empire. Behind many of the most interesting legal cases lie stories of great personal distress and courage. We need to remember and pay tribute to those who have taken a stand, sometimes at great personal risk, and helped the Committee and through them the local courts to improve the law, not only for their own sake but also for the benefit of their societies.”

An interactive ‘globe’ will sit at the heart of the exhibition, underlining the geographic breadth of the court’s impact and enabling visitors to find out more about the JCPC’s links with a range of countries.

Dr Chatterjee explained:“This exhibition has given us the opportunity to show that law is something that is not formal and distant from everyday life. It is something that touches the lives of all, from the most powerful to the most vulnerable. The exhibition tells the stories of such lives, lived in the British Empire, which were affected by the law of empire. For example, I find the Indian case in which a teenage daughter was separated from her widowed mother, on grounds of the mother’s alleged religious and moral deviation, a deeply poignant reminder of how difficult legal intervention in family disputes can be, especially in complex cultural situations.”

Two public lectures and a series of educational days for school students will accompany the exhibition, which has been supported financially by the Supreme Court, the University of Exeter, the University of Reading, the Journal of Legal History and Hart Publishing.