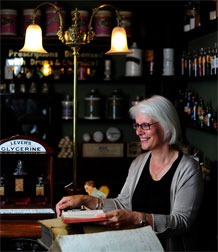 Find out more about Bracton Centre for Legal History Reseach

This follows a number of years on the journal’s Editorial Committee, which has a distinctly International composition.

Founded in 1980, the JLH is the leading journal in the field.  It publishes articles in English on the sources and development of the common law, both in the British Isles and overseas, on the history of the laws of Ireland, Scotland and Wales, and on Roman Law and the European legal tradition.

It is particularly apt that the Editorship has come to Exeter Law School since Professor Stebbings is a founder Director of the Exeter-based Bracton Centre for Legal History Research, which has gained a strong international visibility and profile in the field.  Professor Stebbings along with co-Director Professor Anthony Musson have in the recent past twice hosted the British Legal History Conference (the major international conference attracting delegates from over 20 countries), and her appointment as Editor confirms and emphasises the standing of the Bracton Centre and the Exeter Law School in this fundamental and important sphere of law.