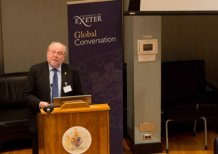 Professor Schmitt has been on a research and speaking tour for the last two months.

In mid-September, he co-hosted a workshop on the notion of “unwilling or unable” in international law at the London School of Economics’ Centre for Women, Peace and Security.  The small, by-invitation event brought together senior scholars to consider whether human rights law, refugee law, and other legal regimes might inform the understanding of when States may conduct cross border attacks against non-State actors if the State where they are located is unwilling or unable to put an end to their unlawful activities.  From there, Professor Schmitt headed to Exeter University for a workshop led by Dr. Kubo Macak of the Law School.  The workshop convened international law experts to discuss the impact of international humanitarian law on other facets of international law. Drs. Aurel Sari and Agnieszka Jachec-Neale also participated.

Professor Schmitt then travelled to the British Defence Academy and co-directed a course on cyber law for military officers and other government officials on behalf of the NATO Cooperative Cyber Defence Centre of Excellence (CCD COE), where he serves as a Senior Fellow.  The Centre annually offers the course at the Defence Academy.  Professor Schmitt flew next to Montreal to attend the inaugural meeting of the Manual on the International Law Applicable to Space. The MILAMOS project brings together international law and space experts from around the world to collaboratively asses the state of space law over a three-year period.  Professor Schmitt is leading the international humanitarian law team, on which Dr. Macak also serves.

In October, he headed back to the British Defence Academy to participate in a workshop attended by government attorneys on the legal requirement to review weapons before they are fielded in combat.  The particular focus of the workshop was autonomous weapon systems.  Following the event, he was in Washington for two events.  The first was an Exeter University “Global Conversation” held at the British Embassy on 18 October.  Hosting the event were Vice-Chancellor Sir Steve Smith and Provost Janice Kay.  Professor Schmitt spoke about his work on the international law governing cyber affairs that will result in publication of “Tallinn Manual 2.0” in January by Cambridge University Press.  Later in the week, he sat on a panel discussing cyber law at the Cyber Conflict West Conference together with representatives from Microsoft, US Cyber Command, the US State Department, and the NATO CCD COE.  He is now concluding his travels with a two week stay at the CCD COE in Estonia, completing the work on the Tallinn Manual.