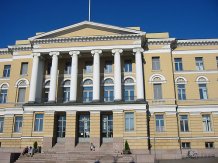 ‘Totalitarianism, Law and the Idea of Europe’

Dr Skinner has recently returned from Finland where he presented a paper at a conference the University of Helsinki.

Dr Skinner was invited to participate in a three-day workshop on ‘Totalitarianism, Law and the Idea of Europe’, organised as part of an ERC-funded project on ‘Reinventing the Foundations of European Legal Culture, 1934-1964’ at the University of Helsinki.

The overall project focuses on the role of Roman Law and key Roman law academics under National Socialism, and the workshop, which was the project’s inaugural event, sought to explore a range of historical, theoretical and comparative perspectives on the relationships among totalitarianism, law and European legal traditions.

Dr Skinner’s paper, entitled ‘Law as Protection, Law as Power: Legal Certainty and Threats to the State in Fascist Italy and England in the 1920s-30s’, explored issues of continuity, paradox and problematic proximity between offences of vilification of the State under the 1930 Italian Penal Code and the crime of seditious libel in England. His paper built on his ongoing research into the nature of criminal law under Fascism and democracy in the early twentieth century.