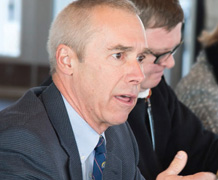 Professor Michael Schmitt will provide expert knowledge to the US Government.

University of Exeter academic to advise US Government

A University of Exeter expert will advise the US Government and policy makers around the world on warfare after being appointed to a prestigious new role.

Professor Michael Schmitt will provide expertise on the legal issues raised by the complex ways battles are now fought.

He will work with academics and non-governmental organisations to ensure international law is applied properly at sea, on land, and in the air, space, and cyberspace during military operations.

He hopes his work will help ensure greater protection for civilians caught up in armed conflict, improve standards of detention and lead to improved humanitarian relief for those in need. By giving policymakers independent advice, his hope is that they will recognise their legal responsibilities more clearly.

Professor Schmitt will be the inaugural Francis Lieber Distinguished Scholar at the newly established Lieber Institute for Law and Land Warfare at the United States Military Academy at West Point.

He said: “Warfare is becoming extremely complex, both from an operational and legal perspective. Battles are being fought against enemies that have no affiliation with other states, such as ISIS. Indeed, in Syria there are hundreds of different groups fighting from different states, and this morass is combined with a mass movement of refugees, intentional targeting of civilians and the bombing of hospitals and other protected places. In situations such as these it is imperative that governments do not lose their moral compass.

“We have seen how the application of law sometimes suffers, for example after 9/11, when decision-makers struggled to adapt to the changing nature of warfare. The result can be a negative impact on civil liberties, human rights, and the safety of civilians.

“The aim of the Institute will be to track change and assess its legal implications. In doing so, it will serve as a highly objective think tank. Although we will primarily be advising the US Government, our work will benefit the armed forces and governments of all nations.”

Professor Schmitt will develop a research programme and coordinate workshops and publications in order to produce the independent advice. The Institute will collaborate closely with staff from the Stockton Center for the Study of International Law at the United States Naval War College, where Professor Schmitt is chairman.