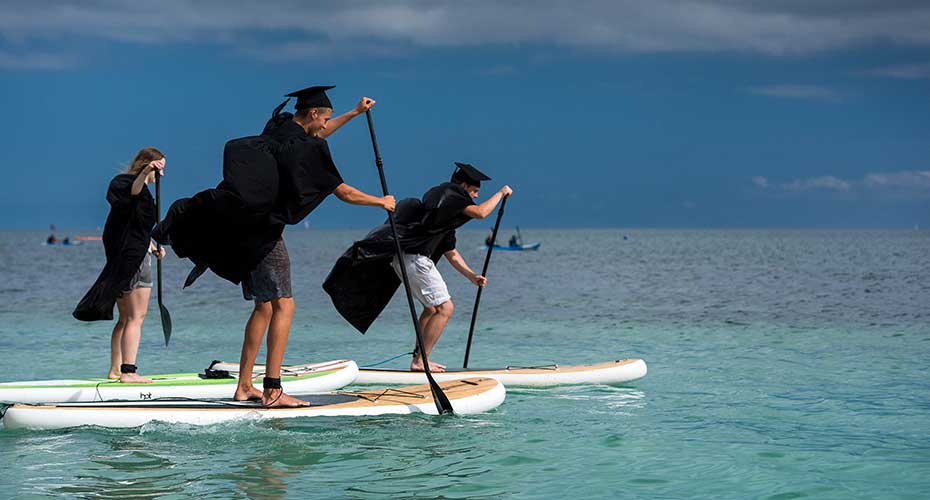 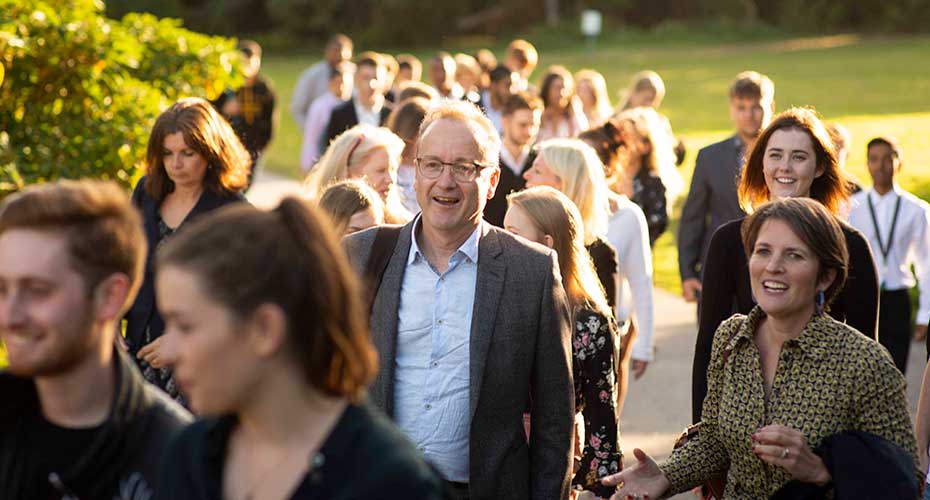 A very warm welcome to the University of Exeter Law School, Cornwall; we are so pleased that you will be joining us in September

We are very proud to be part of the staff team behind the law and business degree programmes – and we are delighted that you are going to be a part of our third cohort. We are passionate educators who are thoroughly committed to creating a diverse and thriving student community. We believe that this is achieved by providing a supportive learning environment which nurtures talent throughout your time with us. We’re looking forward to meeting you soon so that we can all start to work together!

We're currently planning our Induction Week activities from 13 September to welcome you to the University of Exeter, so some of the information provided here will be changing as new details are released. We're also working within Government guidelines meaning information and activities may change as that guidance changes as well.

Please ensure you check back here frequently for updates, as well as checking your personal email account, your new University of Exeter email account, and your timetable for the most up-to date information from us. Please note you must have registered with the University and activated your IT account to access your timetable. (see the section entitled ‘Activate your IT account’).

If you have any questions about joining us, including accommodation and selecting your modules, the Info Point at Penryn will know! You can contact them as follows:

Things to do before you arrive

For law and business preparation, please see the ‘Pre-reading and academic preparation’ section below.

Prepare for your studies in the College of Social Sciences and International Studies and meet your fellow students.

This schedule may be subject to change - please check your personal timetable online, via My Timetable, for the latest information.
Last updated: 4th August 2021

Please note:
All times below are UK time

Over the first four weeks of your studies, we will introduce you to your course, the study of law and business here on our Cornwall campus, and to Exeter Law School and Exeter Business School. Your induction ends with this year’s Hack.

The Hack is for all students on the law and business degree programmes, held on campus and online. We’ve got a packed programme of activities to help you build the team-working skills you’ll need for your work in LAW1022C Legal Foundations and other modules as well as your core legal skills. The Hack marks the beginning of your work in your law firms, where you'll use your legal and business knowledge to build a case and start to develop your advocacy skills! This year’s Hack is all about the right to protest.

You do not need to conduct any pre-reading before you start; we will provide you with all the materials for the course when you begin studying. If you would like to get a flavour for law with business before you start, though, then take a look at some of our staff and current student recommended resources on our website (note that this is not your course content, but a suggestion of engaging resources to support your learning; some resources we have recommended are not free – please do not feel that you need to purchase these).

In the first week of the Legal Foundations module (compulsory for LLB & BBL students), we will discuss what makes a good lawyer. We will use our legal heroes as inspiration to think about what kinds of skills good lawyers have.

Perhaps you don’t yet have a legal hero yet – that’s fine! Just have a think:

You can also talk about your hero when you meet your firm. Just to get you started here are some of us with some of ours:

Camilla: My legal hero is fictional: Atticus Finch from the novel "To Kill a Mockingbird". It was the book I read in my childhood which first got me interested in law and issues of discrimination. My real-life lawyer hero is Karon Monaghan QC not just for her work in discrimination law, but also for her role in the case of R (on the application of UNISON) (Appellant) v Lord Chancellor (Respondent) 2017 which is such an important case on access to justice and the rule of law.

Caroline: Constance Baker Motley, a civil rights lawyer, fighting nearly every important civil rights case in the US for two decades. She excelled in the quiet, painstaking preparation and presentation of lawsuits that challenged racial segregation across the US. Her legal victories included the landmark school desegregation case of Brown v Board of Education in 1954.

Elif: Leading women’s activist and lawyer in South Africa during the times of apartheid, Victoria Mxenge. She combined activism with her practise of law. This approach to legal practise, which I admire, turned law into a practise of change in the service of freedom and equality.

Janet: In the academic field Alan Norrie is a legal hero. Norrie is a professor of criminal law and legal theory who takes a refreshingly different approach to the ideas that underpin our criminal law and criminal justice system. He challenges us to rethink concepts such as blame, responsibility and guilt which are focused on the individual and in his intriguingly named book ‘Law and the Beautiful Soul’ he explores a ‘relational’ approach to justice which argues that any judgment of an individual must take account of the broader environment and situation in which he finds himself.

Josh: Elisabeth Mann Borgese, a professor at Dalhousie University, Halifax (Canada), and an internationally recognised expert on maritime law and policy, and protection of the environment. She was one of the founding members and for a long time the only female member of the Club of Rome.

Mark: Baroness Brenda Hale. Aside from leading the way in the overdue process of increasing female representation amongst the senior judiciary, as President of the Supreme Court (2017-2020) she was central to legal decisions which held the UK Government to account. Baroness Hale began her career as a legal academic (an inspiration to lecturers!), worked at the Law Commission and progressed through the ranks of the judiciary on merit. She has been an outspoken advocate of judicial diversity, and was well known for her contribution to the development of family law and her accessibility to the public and to law students.

Nick: Sir Hersch Lauterpacht, a key figure in the development of the modern international legal order. He made an enormous contribution to international humanitarian law, drafting Article 6 of the Nuremburg charter and “An International Bill of the Rights of Man", itself later contributing to the European Convention on Human Rights which continues to protect us today. Despite flagrantly racist objections from the then UK Attorney-General (who thought Lauterpacht’s immigrant status ought to disqualify him), Lauterpacht was elected as the British judge at the International Court of Justice. He continued to serve until his death in 1960.

Will: My legal hero is Oliver Wendell Holmes Jr. Holmes was a Justice of the US Supreme Court and arguably laid the foundations for a view which very few people would now disagree with: that the law is not like maths. When a case comes to court, there isn’t always a neat answer ready and waiting which the judge just has to ‘discover’ (perhaps in a book); rather, law is a social practice, and judges are influenced by morality, politics, and other factors, and have an important role to play in shaping law to meet society’s needs. Holmes’ view helps us see much more clearly what law is and how it works, whereas the view of law as being no more than a formula obscures both what judges do and what the law is.

If you are a LLB Law with Business student you will also need to choose the business modules you will study in your first year.

LLB Law with Business Students study three compulsory 30-credit modules in law in the first year across the whole of terms 1 and 2:

You also study 30 credits of Business in your first year.

You have a choice of two out of three (15 credit) business modules:

Which modules should you choose?

Before you make your choices think about workload:

How to register your module choice

Once you have registered for your University email account, you will be able to receive the emails which tell you how to log in to the online module selection system (OMS) and choose your modules.

You can access all your textbooks online using Law Trove (use the ‘Sign in via your Institution’ link on the left-hand side of the main Web page). Many other books are available in electronic formats via the University’s library website, and further materials will be accessible from our digital platform.

You may find that you wish to order the books in hard copy, in which case, these can be obtained from Blackwell’s bookshop and sent to you or be made available to collect in the campus branch. Blackwells are offering a bundle of key books for first-year students, so you may wish to consider purchasing this. You may also be able to find second-hand copies or borrow them from the library.

Please note it is not compulsory for you to buy these books before the start of term.

Information for all new students

You can take a virtual tour of the campus with one of our students before your arrival (select ‘Explore by subject’ and then choose ‘LLB Law with Business’).

Please follow the links below to find out more:

We really welcome you to get in touch if you would like to ask questions about your course or how you will study.

We can be contacted at: business-law-cornwall@exeter.ac.uk 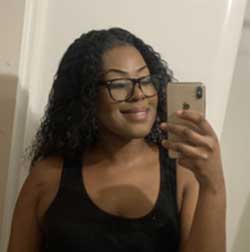 I’m Anastasia, Law Co-Subject chair of the SSLC (Staff Student Liaison Committee . Your Education within the next few years will likely shape who you become. So it’s important to us that you really benefit from the support and services we offer throughout the year. We can’t wait to encourage positive change and represent your views and opinions in creating an amazing student experience for you at The University of Exeter. 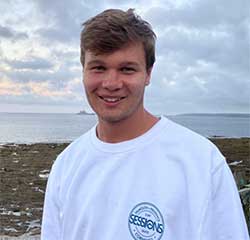 Congratulations on achieving your spot on the Law with Business course here at the University of Exeter’s Law School in Cornwall. I can tell you from experience that you’re all about to have a fantastic few years! I’m Jack, the Co-Chair for the Law with Business Student Staff Liaison Committee (SSLC). I will be working to ensure your views & voices are heard as we celebrate your exciting achievements and resolve any challenges that arise. I look forward to meeting you all in September!